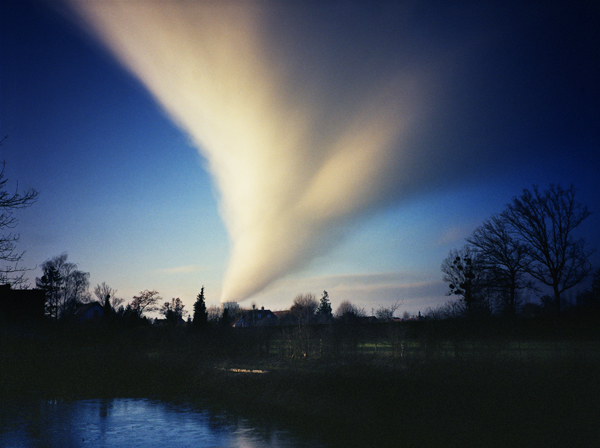 “Ground Cloud 037” (2005), by Han Sung-pil is one of the works appearing at the media center of the Seoul Nuclear Security Summit.


A strange looking cloud rises from a distant structure and rises above a deep blue sky in a series of photos on display at the 2012 Seoul Nuclear Security Summit at COEX in southern Seoul. 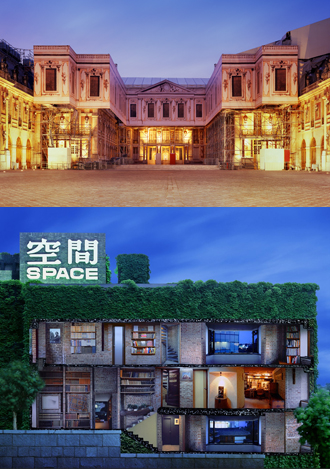 Han is best known for his “Facade” series including the 2008 work “Le Roi Soleil,” top, and the 2009 work “Ivy Space.” Provided by the artist

But the cloud is not a product of nature. It is steam rising from the cooling towers of the nuclear power plant at Nogent-sur-Seine, a commune in north-central France.

The sight of the cooling towers that lie hidden in the distance amidst a cover of picturesque trees is bound to make viewers feel delicately uneasy.

That’s how artist Han Sung-pil, who created the photo series “Ground Cloud,” said he felt when he arrived at an adjacent town in 2005 to participate in a residency program for artists from around the world.

“The residency was in an old castle-like building and people would be fishing in the river nearby,” the 39-year-old artist said in an interview with the Korea JoongAng Daily last week. “Across the river, the cooling towers were belching steam 24 hours a day. In that way, the idyllic landscape was coexisting with a thing that could turn into an extreme danger. The scene looked surreal to me, even though it was real.”

Han is one of the seven Korean and three Japanese artists who are showing works related to nuclear issues at the summit media center as part of the “Art Project 2012: Communion” exhibition planned by Korea’s National Museum of Contemporary Art that started Sunday and ends tomorrow. 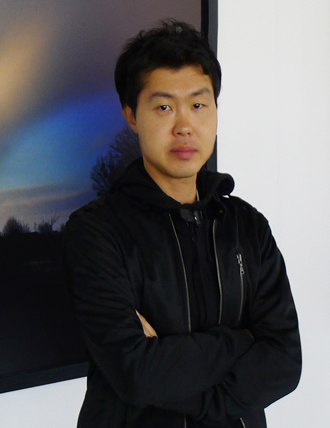 His “Ground Cloud” photos are not apparently for or against nuclear power. They just calmly show the “ironic coexistence” of the plant and the bucolic landscape, urging viewers think about it. Is the nuclear power plant a potential source of danger that threatens the beautiful landscape just as the one in Fukushima, Japan, did a year ago? Or is it the only practical option for supplying a sufficient amount of energy while keeping the landscape clean, unlike fossil fuels?

The plant in the “Ground Cloud” series is one of the 59 nuclear power plants in France, which relies on nuclear energy for about 75 percent of its power supply.

The nation has been in the midst of a hot debate over nuclear power since the disaster in Japan last year. On the first anniversary of the disaster earlier this month, demonstrators opposed to nuclear power formed a human chain 230 kilometers long, stretching from Lyon to Avignon.

As for the artist, when asked whether his views of nuclear power had changed since he created the “Ground Cloud” series in 2005, he said: “One thing is clear; the Fukushima disaster has changed the way people, including myself, think about nuclear issues, turning what was once something vague and distant into a tangible, urgent issue,” Han said.

“I now support a reduction in our reliance on nuclear power but I also know that, practically speaking, it will be difficult to do that in a short time,” he continued. “We know that fossil fuels cause global warming. The use of renewable energy needs to be more widespread, but it will take time.”

“In any case, the governments of the countries with nuclear power should be required never to hide information from the public,” he added, pointing to the recent blackout at Korea’s oldest nuclear reactor in Gori, Busan.

Officials in charge of the reactor at the state-run Korea Hydro & Nuclear Power did not report the incident and kept it secret for nearly a month.

Han said he is currently reading “Voices from Chernobyl” by Belarusian investigative journalist Svetlana Alexievich in order to understand the effects of nuclear accidents. The book offers vivid accounts from victims of the Chernobyl nuclear disaster and is based on more than 100 interviews conducted over a decade.

“The book shows that, rather than the accident itself, the Soviet Union’s decision to hide the facts from the public caused the bigger disaster,” he said. “That will be true for all nuclear accidents.”

Han, one of the country’s most popular young fine-art photographers, created another photography series on the environment called “Blue Jungle,” also in 2005. The series is about the destroyed jungle in Kalimantan, the Indonesian part of Borneo Island shared by three countries.

But Han is best known for his “Facade” series, which deals with aesthetic rather than social issues. The series consists of photos of the screens that cover buildings under construction or repair and are decorated with images of the completed buildings. Other photos in the series are of buildings covered in trompe l’oeil murals.

With such elaborate photos, it is hard to tell the where the screens or murals end and the surrounding environment begins. The artist has said that these works show that by blurring the boundary between the original and the replica “photography is the most real and most illusionary medium at the same time.”

Asked whether he focuses more on works with social or aesthetic themes, he said, “I don’t think about such boundaries. I just take pictures of images that break a stereotype I’ve held or that have some sense of irony.”

The artist, who has traveled to various parts of the world for his work over the last decade, said that the country he would most like to visit is North Korea.