Baby-making is down, walking up aisle goes up

Baby-making is down, walking up aisle goes up 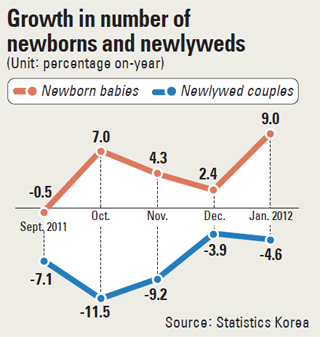 The number of newborn babies decreased for the fifth month in a row as anxiety over economic conditions dampened couples’ family plans, data from the nation’s statistics agency showed.

However, more couples got married over the past four months partly thanks to a popular superstition related to the lunar calendar.

According to a report released yesterday on population by Statistics Korea, some 45,400 newborns were registered in January, a decrease of 2,200 babies, or 4.6 percent, from January 2011.

January was the fifth month in a row that registrations fell since September 2011, which saw a 7.1 percent on-year drop. Analysts said anxiety about rising consumer prices and slowing economic growth discouraged couples from conceiving.

“The number of newborn babies tend to be affected by what kind of societal conditions existed 10 months before the fact,” said a Statistics Korea official.

“March 2011 was a time when where consumer sentiment was at its worst point in the past two years, as consumer prices rose by almost 5 percent. Ordinary people’s worries grew, and it seems to have led to a dent in the birthrate.”

“In January of last year, there was an 11 percent on-year increase in the number of registered babies,” said the Statistics Korea official. “Parents favored giving birth during 2011 because it was the Year of the White Tiger [in the Chinese zodiac].”

Meanwhile, the number of marriage registrations reached 29,200 in January, rising by 9 percent on-year, the greatest increase since November 2010. Although couples usually avoid weddings in the cold months, analysts said they may have been rushed by an upcoming “leap month” in the lunar calendar.

Because the 12 months of the lunar calendar are roughly 11 days shorter than the Gregorian calendar, lunar “leap months” are intermittently added. One is coming up between April and May, and getting married during a leap month is considered highly inauspicious.

The number of registered marriages has outpaced the previous year’s since reaching 25,900 couples in October 2011, a 7 percent jump from the previous October.