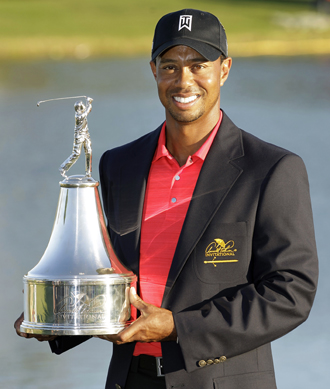 ORLANDO, Florida - Tiger Woods snapped the longest winless drought of his career with a dominating five-shot victory over Graeme McDowell at the PGA Tour’s Arnold Palmer Invitational on Sunday.

It marked the first PGA Tour victory for Woods in 30 months, ending a winless spell that coincided with the personal turmoil that followed a 2009 sex scandal.

“It’s not like winning a major championship or anything,” Woods said. “But it certainly feels really good.”

The 14-time major winner, wearing his Sunday red and black pants, celebrated his 72nd PGA Tour victory with a fist pump then the customary shaking of hands with runner-up McDowell, who finished at 8-under 280.

“Today was unbelievable. The conditions were rough and those pins,” he said. “I don’t know what the average score was today, but it certainly wasn’t anywhere near par.”

England’s Ian Poulter finished in third seven shots behind Woods, while South Africa’s Ernie Els was part of a group of seven golfers who tied for fourth at the $6 million event.

Woods had been on a win drought since revelations of his secret sex life in November 2009 left his reputation in tatters, put his marriage on a path to divorce and sent sponsors fleeing.

Amid the uproar, Woods’ game suffered, and his struggles continued in 2011 as he battled to cement swing changes despite injuries that limited his playing time.

“I am thankful for a lot of people helping me out. You all know who you are. It has been tough,” Woods said.

Woods did post a win in December, but that came in the limited-field Chevron World Challenge in southern California, an invitational tournament that he himself organizes to provide funds for his charity foundation.

Sunday’s official PGA Tour win was the largest margin on the Tour since Rory McIlroy won the 2011 U.S. Open by eight shots.

Now with the Masters just a couple of weeks off, Woods heads to Augusta where he will try to continue his march toward Jack Nicklaus’ record of 18 majors.

“I am excited no doubt,” Woods said. “It is always fun to play it. I am looking forward to the momentum I have built here and the things I have worked on with my game. It is all coming together at the right time.”

Woods entered the final round with a one-shot lead on McDowell then seized command on Sunday with a flurry of birdies on the front nine.

He compiled a four-shot lead midway through the round by making four birdies on the front.

“It does feel good,” Woods said. “It feels really good. A lot of hard work.

“I’ve gotten better, and that’s the main thing. I’ve been close for a number of tournaments now. And it was just a matter of staying the course and staying patient, keeping working on fine-tuning what we’re doing. And here we are.”

Woods, who has a formidable record as a front-runner, is familiar with the Bay Hill course having lived in the area previously. He has a stunning 38-2 record on the PGA Tour when taking an outright lead into the fourth round.

“It was incredible to have that type of support,” he said of the friends who came out to watch him this week. “I used to live here for so long.” AFP