SK Hynix is launched with major goals ahead

SK Hynix is launched with major goals ahead 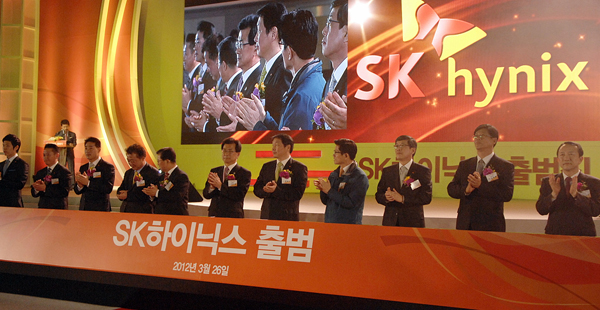 
ICHEON, Gyeonggi - SK Hynix, formerly Hynix Semiconductor, was launched yesterday and will continue to shoot for the title of world’s top chipmaker as a subsidiary of SK Group.

“SK Hynix will put in the effort to move the world’s second-largest chipmaker to the top,” Chey Tae-won, chairman of SK Hynix and SK Holdings, said at a launch ceremony at a factory in Icheon, Gyeonggi. “SK Group will struggle to create the ultimate happiness for its workers and its customers.”

Korea’s third-largest conglomerates will reorganize SK Hynix’s businesses to follow the fast changes in the IT industry as it evolves from PC-based computing to mobile-device computing.

Currently, the mobile-device products account for around 40 percent of the company’s business, but the proportion should grow to 70 percent, according to SK Group.

“Based on how we lead SK Hynix and how we maximize the synergy effect, SK group can expect to create more synergy with other companies,” Chey said.