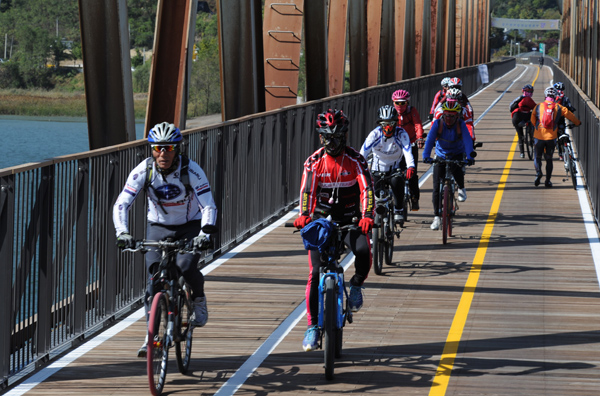 As countries become more advanced, the value of weekend hours becomes higher than that of weekday hours. In case of the U.S. the traffic jam cost of weekends and public holidays takes up 50 percent. Compared to the income level of the U.S., Korea’s traffic jam cost during weekends and public holidays is estimated around 30 percent and reaches 7.5 trillion won ($6.6 billion) a year. 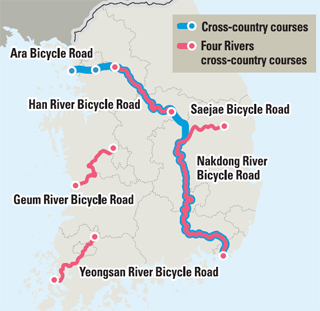 Those who point out the traffic jams simply argue and complain that roads for commuting are more urgent - so why is the government constructing leisure bicycle roads that are used only in the weekends and vacation season? The answer is that as the 5-day working routine is widely accepted and since citizens prefer various leisure activities, bicycle roads have become more important than ordinary highways. These bicycle roads have become an alternative solution to reduce the cost of heavy traffic jams during the holidays.

Some advanced countries have been aware of the broad utility of bicycles and have constructed bike trails on a national level. The Netherlands, only one-third the size of Korea, has a coastal bicycle road that connects the central roads of major cities, coastal resorts and historical towns. There are about 23 routes connecting up to 4,500 kilometers (2,796 miles). Denmark also has about 11 routes altogether totalling about 10,000 kilometers of bicycle road.

In Korea, the Four Rivers Restoration Project, which was a loudly contested political issue for years, has become the “Four Rivers Cross-country Bicycle Roads Project.” The Four Rivers Bicycle Roads are bike trails constructed near the four major rivers of Han River, Nakdong River, Geum River and Yeongsan River. The Ministry of Land, Transport and Maritime Affairs had a proclamation ceremony on March 20 and announced that the Four River Bicycle Roads will be open for trial until April 21.

The Four Rivers Bicycle Roads add up to a total of 1,757 kilometers. Using the abandoned Namhan River railway, previous roads, farm roads and village roads, it has constructed an additional 260 kilometers of detouring route.

The Korea Forest Service connected one forest road of 4 kilometers and completed the Four Rivers Bicycle Roads. The 1st phase of construction from the Han River to Sangju was completed in September last year and the 2nd phase from Incheon to Busan was also completed at the end of November in 2011. Branch sections of Bukhan River and Seom River are also finished. 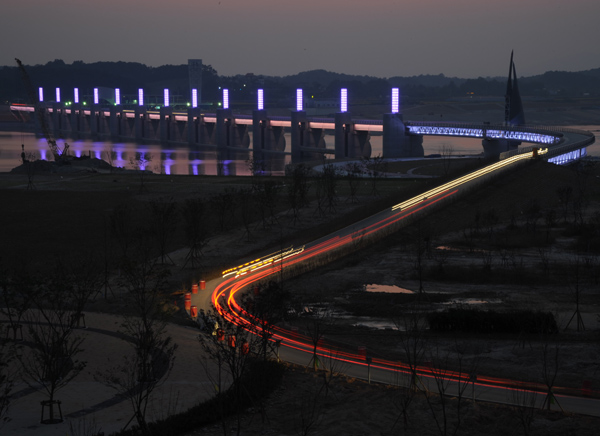 The Han River Bicycle Road is a 136 kilometer road from Paldang Station to Chungju Dam reusing the former central railway. Since the bicycle road was opened last year, 2,000 to 3,000 visitors have used the road on weekdays and 5,000 people are visiting during weekends.

The reason Namhan River bicycle road is so popular is because it offers beautiful vistas of Jeong Yak-yong historic sites and Dumulmeori. The historic site of Jeong Yak-yong in Joanmyeon Neungnaeri of Namyangju and Semiwon, where has six ponds with lotuses, frog lilies and irises, are also recommended visiting places.

At very steep roads there are safety fences, preventing bike riders from pitching over the edge.

Mungyeong City, which expected many tourists and bicycle clubs to visit the road, has 140 bicycles for rent prepared and has reorganized its ecological park.

The Yeongsan River Bicycle Road is a 133 kilometer trail from Damyang Dam downstream to Mokpo Yeongsan River estuary weir. Compared to other rivers, the total course is quite short and there are fewer slopes, so it’s a good course for family visitors to enjoy bicycle rides. In particular, the Yeongsan River Bicycle Road passes by the Naju Image Theme Park and connects to a wild flower garden. Meanwhile, the pride of Honam, the Naju Plain, stretches out in parts of the bicycle road, another attraction of this course.

The Geum River Bicycle Road of 146 kilometer from Daecheong Dam to Geum River estuary weir is another course that’s hard to miss. It passes Buyeo Wangheungsaji (the Wangheungsa Temple Site), Ganggyeong Pogu (port), the Sinseongli field of reeds as well as the Nonsan Plains. The bicycle road passes through the Nonsan Plains, the Muryeongwangreung and the historic remains of the Baekje Dynasty.

These bicycle roads will have a bicycle resting area every 30 kilometers and a bicycle hotel is planning to be constructed every 50 kilometers where sleeping and bicycle repair are available. At every 60 kilometers a camping site is also under planning. Regional themes will be created for each trail, opening an era of visiting regions of Korea with a bicycle and understanding their unique cultures.

As the bicycle roads are expanding, the current bicycle road along the Han River will also be upgraded. The government has focused greatly on accident prevention. At the Han River Railroad Bridge and 98 other places that had the highest number of accidents between bicycles and pedestrians, a pedestrian crosswalk will be constructed. From 50 meters before the pedestrian crosswalk, signs and antislip paint will be guiding cyclists to reduce speed.

A 20 to 80 meter high wooden deck of 500 meter length will be constructed at Yeouido Saetgang Nadeulmok area, which frequently sank under water when it rained.

Additional bicycle rental areas will open in the Han River Park. There is a new system where you can rent a bicycle at any of the rental shops and return at any of the other shops, abnegating the need to return to the shop from which you initially borrowed the bicycle.

Now you can roam everywhere Korea with just a bicycle. Riding a bicycle along the Han River, now you can enjoy the river breeze and even the salty sea wind and sunset of the Yellow Sea.

*Tips for enjoying the trails: Before starting a trip with a bicycle, it is good to visit the Seoul City bicycle Web site (http://bike.seoul.go.kr) and look through the course and schedule, as well as the bicycle road map and bicycle road search service. You can also check bicycle rent stations. The Four Rivers bicycle cross-country course can be found on the Four River Web site (http://www.riverguide.go.kr). If you choose the ‘cross-country course’ from the web site you can see the map, recommended theme course, roads and weather forecast. The distance, expected time, difficulty according to the slope are available on the web site.