Hu tells Pyongyang to call off its satellite launch

Hu tells Pyongyang to call off its satellite launch 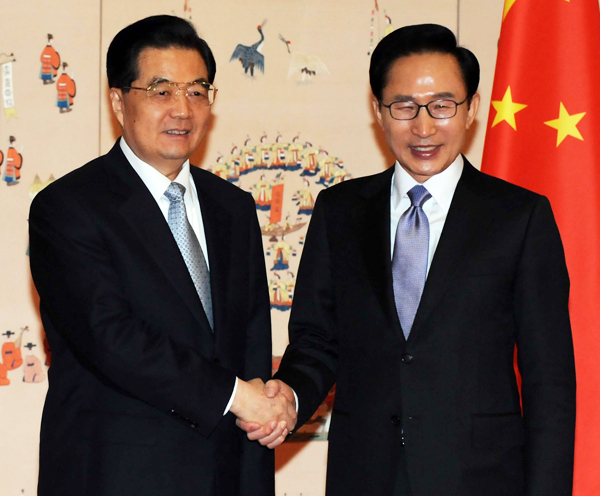 
Chinese President Hu Jintao implored Pyongyang to give up its planned satellite launch next month and focus on people’s livelihood, a rare rebuff of its close ally and neighbor.

At a bilateral meeting with South Korean President Lee Myung-bak on the sidelines of the two-day Seoul Nuclear Security Summit yesterday, Hu said, “The Chinese leadership is expressing deep concerns [about the North’s rocket launch plan] and making efforts to constantly communicate with the government to halt [the plan],” according to the Blue House.

“China’s position is that it is wrong for North Korea to launch a satellite, and it is trying to persuade them to give it up,” Kim Tae-hyo, deputy national security advisor to Lee, told reporters at a briefing yesterday after the meeting. “And [Hu said] North Korea should pay attention to people’s livelihood rather than [developing] missiles.”

“The two presidents agreed that North Korea’s rocket launch could have a negative impact on peace on the Korean Peninsula and the restarting of six-party talks,” Kim continued.

The North’s planned launch, scheduled between April 12 and April 16, is ostensibly to launch a satellite, but is widely seen as a test of a long-range missile to carry weapons and even nuclear warheads.

The missile launch is seen as a “deal-breaker” for an agreement between Washington and Pyongyang last month, in which the U.S. promised to give 240,000 metric tons of nutritional assistance in return for several pledges by the North, including suspension of long-range missile tests.

U.S. President Barack Obama also pressed the North to refrain from the launch at a bilateral meeting with China’s Hu yesterday. Before the meeting, Obama told Hu in an introductory remark that both countries have a common interest in dealing with nuclear disarmament, and that North Korea and Iran are “of great important to us”.

“We both have an interest in making sure that international norms
surrounding nonproliferation, preventing destabilizing nuclear weapons, is very important,” he said.

On Sunday, Obama told reporters he planned to press Hu to exert China’s influence over North Korea to curb its nuclear and missile tests, saying China’s approach in the past has not “led to a fundamental shift in North Korea’s behavior.”

“Russian President Medvedev said, ‘North Korea should feed its people first before launching a missile,” Kim, the presidential advisor, said at a briefing after the meeting yesterday. “He said ‘North Korea can no longer rely on aid offered from international communities and they should change to develop their economy.’?”

According to the Blue House, the two leaders discussed whether the hungry people of North Korea would welcome a satellite test, which costs lots of money, and Lee stressed that the international community should persuade the North to open up its economy, following the successful examples of China and Vietnam, which was agreed to by Medvedev.

“The Russian president made it clear that the missile launch is an apparent violation of the UN Security Council resolution and a wrong plan, bringing the Korean Peninsula insecurity,” Kim added.

South Korea’s Ministry of National Defense also put additional pressure on the North, saying the ministry will shoot down the North’s rocket if it falls out of its trajectory and into the South’s territory.