Basketball history in the making

Basketball history in the making 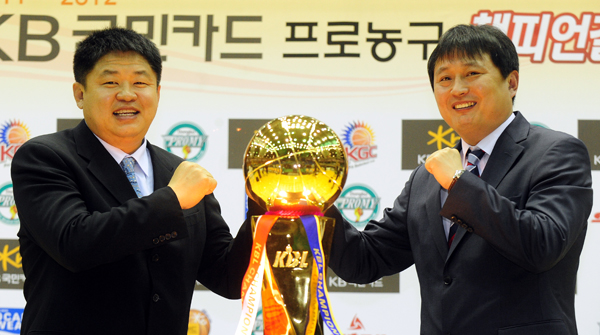 The Wonju Dongbu Promy and Anyang Korea Ginseng Corporation will square off tonight in the KBL Championship Finals in what is expected to be a defensive battle between an experienced veteran Wonju squad and a fast-paced KGC competing in its first-ever finals.

This is the first time since the 2005-6 season that the No. 1 and No. 2 seeds will meet in the finals. The series begins at 7 p.m. tonight at Chiak Gymnasium in Wonju, Gangwon.

The Promy, coming off a historic regular season, reached the best-of-seven finals after handling the No. 5 seed Ulsan Mobis Phoebus 3-1 in the semifinals, while the No. 2 seed KGC advanced after routing the Busan KT Sonicboom in four games.

The Promy set regular season records for most wins (44), the longest winning streak (16) and the highest winning percentage (0.815) with its “triple tower,” comprised of Kim Joo-sung, Yoon Ho-young and Rod Benson, leading the way.

In the six regular season games between the Promy and KGC, the Wonju side won five and lost one by just a two-point margin.

Compared to KGC, the Promy are a veteran club when it comes to championship experience. The three-time KBL champions competed in the finals last season, losing to the Jeonju KCC Egis.

This is KGC’s first championship appearance in franchise history. In fact, not one player on the squad has played in the finals before.

But even with history and a drastically unbalanced stat sheet on his side, Promy coach Kang Dong-hee said the team will prepare for a tight matchup against KGC.

“I’m not joking when I say this series could be decided in the last game,” Kang said at the KBL Finals media day event yesterday. “KGC has solid players on its squad, and there are good matchups in every position.”

KGC coach Lee Sang-beom admitted that the team is less experienced than the Promy, but said his players are ready to shock the league with their high-energy style.

“In order to win, we have to run and run,” Lee said. “I think we have an advantage in terms of energy and stamina.”

Local pundits are predicting that the finals will be one of the best defensive series in KBL history. The Promy allowed only 67.9 points per game, a new KBL record, while KGC gave up 70.1 points per game.

In their six encounters in the regular season, neither team has scored more than 70 points. In fact, on Jan. 11, the two teams combined for a mere 93 points (Promy 52, KGC 41) - the least points ever scored in a KBL game.

Benson, Kim and Yoon are considered to make up the core of both the Promy’s offense and defense. The KGC will start Chris Daniels and Oh Se-keun - a top contender for Rookie of the Year- in the low post, while pressing the Promy in the back court with young and quick guards Park Chan-hee and Kim Tae-sool.

For this series, Promy coach Kang said he has prepared three new strategies to overcome a full-court press and defend Daniels. Coach Lee said his team will rely on its usual fast-paced basketball.

Although their styles are different, the two coaches have the same desire: winning the trophy.

“As the regular season champions, we will aim for the double crown,” Kang said. “Since we are more experienced and considered veterans, we will give KGC a lesson in the finals.”