The curling Cinderella story must continue

The curling Cinderella story must continue 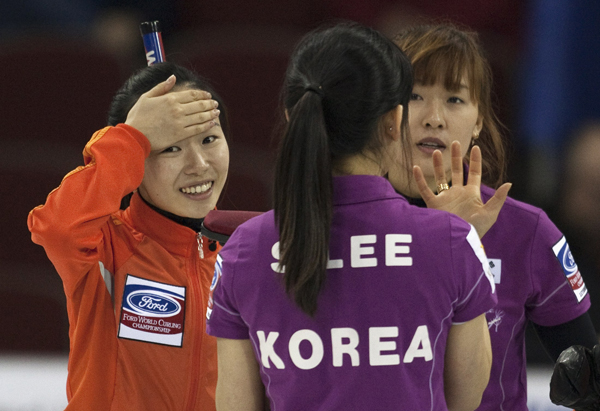 Skip Kim Ji-sun, left, reacts with her teammates Lee Seul-bee, center, and Lee Hyun-jung after the match against the United States at the World Women’s Curling Championship in Lethbridge, Canada, last Monday. [REUTERS/YONHAP]

A Cinderella story in the sporting world is always moving. Watching a team rise to the center of the spotlight, overcoming seeming insurmountable odds, inspires us - gives us hope that we, too, can be successful when we put our best efforts forward and never lose hope.

At the 2012 World Women’s Curling Championship in Lethbridge, Canada, in which 12 nations participated, Korea stunned the world from the onset with eight wins and just three losses. The five-member team made up of skip Kim Ji-sun, second Gim Un-chi, third Lee Seul-bee, lead Lee Hyun-jung and fifth Shin Mi-sung didn’t win a medal after falling to Canada 9-6 in the bronze-medal match on Sunday, but Korea’s semifinal run at the Worlds was still inspiring.

Curling, referred to as “chess on ice,” is not a well-known sport in Korea. Most who come across the game don’t fully understand the rules. With sports like baseball, football, basketball and volleyball getting all the attention, curling has been unpopular, even with winter sports enthusiasts.

Korea has - to be frank - never been good at it, either. In its Worlds debut in 2002, the team didn’t win one game. In 2009, the ladies’ team finished in 10th place, with three wins and eight losses. Last year, it slipped to 11th, with two wins and nine losses.

Perhaps playing against world-class teams was a miracle in itself for Korea. There are only 681 curling players registered in the Korea Curling Federation. In Canada, there are more than two million registered curlers.

There are only two curling-only training centers in Korea: The curling stadium in Uiseong, North Gyeongsang, and the Taeneung National Training Center in northern Seoul. And both venues aren’t proper facilities. The stadium in Uiseong is a public venue where the team can’t practice, while the venue in the national training center has had bad conditions due to a lack of professional ice keepers.

It has been reported that some stones are now broken and the team has trained with stones without electronic handles, known as the “eye on the hog.” The electronic device is important because it detects whether the thrower’s hand is in contact with the handle as it passes the hog line and indicates a violation by lights at the base of the handle. It is a mandatory requirement for international competitions, but because of the expensive installation cost, the ladies have been relying on their own senses to detect their hog-line violations.

It was also reported that the curlers were not even allowed to enter the national training center because the sport is not a medal-collecting event. The ladies slept in a nearby motel.

However, even under these conditions, the curlers didn’t give up. They had a desire to compete in the Olympics and represent the country. Their diligent efforts finally started to pay off last week.

Now it’s time for us to step up our game. From now on, what we need is more support to help these ladies pursue their dream.

Before the tournament, the goal of the curling team was to finish inside eighth place, since the qualifications for the 2014 Winter Olympics in Sochi, Russia, are based on Worlds performances.

But now the team hopes it will win a medal in the Olympics.

If we show more support and affection for this sport, it can be another medal-collecting event at the Olympics for a long time. If not Sochi 2014, let’s make these ladies smile at the 2018 Winter Games in Pyeongchang. The Cinderella story must go on.