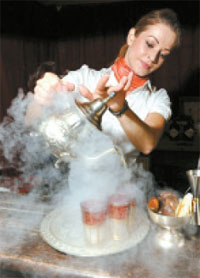 Breznanova is one of the notable woman bartenders in England, having worked at the Nightjar, which is regarded as one of the country’s top bars. Before becoming a bartender, Breznanova worked as a barista and she has since used the experience to create a cocktail that is similar in taste to coffee.

Also available during the event are cocktails made with Don Julio Tequila.

To April 30: The Mediterranean restaurant Cilantro is offering a shish kebab buffet.

Shish kebabs consist of meat, seafood and vegetables placed on a skewer and cooked on a grill. They are popular in the Middle East, India and Asia.

To April 30: Four people dine for the price of three at the lunch buffet under Aria restaurant’s Happy Four Lunch promotion. Diners will also receive a coupon with a 20 percent discount on their next visit.

The restaurant specializes in a diverse array of international cuisine at 10 cooking stations with themes including: sea, home, fire, Asia, noodles, dessert, green and bread. The Asia station features Indian dishes such as curry and tandoori chicken prepared by Indian chefs Devendra Prasad and Jagmohan Singh.

To May 31: The Chinese restaurant Man Ho is promoting its white asparagus menu, which offers two sets.

April 1 to June 30: The buffet restaurant Cafe Elysee is offering a selection of regional and seasonal specialties from Gyeonggi Province.

To July 28: Internationally renowned vocalist and pianist Mark Willms brings his music to The Timber House.

Canadian musician Willms has 45 years of experience performing in Hong Kong, Dubai, Switzerland and Japan and has a voracious appetite for music.

His style covers a wide range of genres from pop and jazz to country and progressive rock.

He gained widespread recognition through his appearance as a singer at a piano bar in the 2003 film “Lost in Translation.”

He provided all of the piano music for the piano bar scenes throughout the movie.

Event information is culled from the hotels.