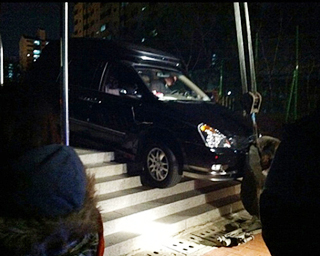 When actress Park Ha-sun uploaded a photo of her car sitting on a set of stairs on March 26, her fans were startled.

The strange site was apparently the result of bad driving on the part of Park’s manager, who said that he simply didn’t see the stairs in the dark.

“The car is being rescued at the moment,” Park posted along with the photo on Me2Day. “Who’d have thought that I’d witness a scene like this in real life?”

In response to her fans’ concerns, Park quickly added that neither she nor her manager were injured in the fender-bender.

“It really wasn’t much of an accident, but as so many fans were worried, she decided to put the situation to rest,” the star’s agency said.