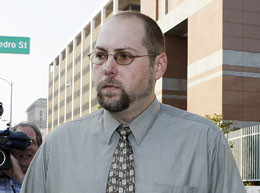 He was ordered held in custody and faces up to 60 years in prison, plus fines and restitution of about $2.5 million when sentenced in July.

Chaney, who admitted to hacking the e-mails of more than 50 celebrities, was arrested in October 2011 after an 11-month investigation named “Operation Hackerazzi” by the FBI.

Other victims included former Disney Channel star Vanessa Hudgens and Renee Olstead, one of the stars of ABC Family’s “The Secret Life of the American Teenager.” Other victims were identified only by their initials, including J.A., B.P. and L.B.

Chaney, a clerical worker, told a Florida TV station shortly after his arrest that he had become addicted to prying into the affairs of movie stars and did not know how to stop.

Johansson said later that the photos of herself topless and wrapped in a towel with an exposed backside were taken for her then husband, actor Ryan Reynolds.

Chaney admitted that he had e-mailed many of the photographs and other personal information that he stole from celebrities to another hacker and to two entertainment Web sites.

“This case demonstrates that everyone, even public figures, should take precautions to shield their personal information from the hackers that inhabit that dark underworld,” Birotte said in a statement.

Chaney admitted on Monday that he managed to hack into the personal e-mails of his targets by clicking on the “forgot password” feature of their accounts and replying correctly to security questions by using publicly available information about celebrities that he found on the Internet.

Once in control of the e-mail accounts, he obtained private photos, business contracts, scripts and other documents.

He went through contact lists to find other victims and sometimes posed as friends to request more private photos. Reuters