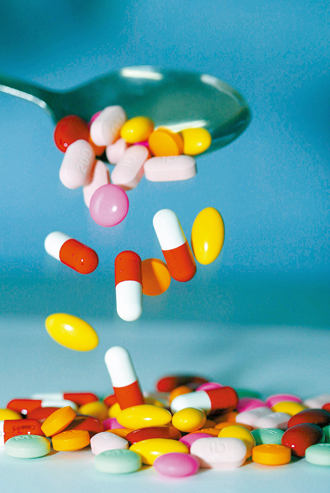 The Ministry of Health and Welfare has said it wants drug prices to go down on average 14 percent in April, and the drug companies have decided not to fight it but to find other ways to stem predicted losses.

An evidence-based formulation refers to a new pharmaceutical product, made by combining more than two existing drugs.

The Korean and British drug manufacturers will develop new drugs and conduct research and development and clinical tests together. Hanmi will take financial responsibilities for initial stages of codevelopment projects, while GSK will pay for latter parts, the Korean company said.

Under the strategic alliance, Hanmi will be paid by GSK upon certain stages being achieved, so-called “milestone payments.” The two companies agreed to keep the amount being paid confidential.

The two will set up a commission on R&D and confirm the first joint project within the first half of the year.

“This strategic partnership between Hanmi and GSK is proof of Hanmi’s technological capability to develop evidence-based formulations,” said Lee Gwan-sun, CEO of Hanmi.

Lee forecast that the first product coming from the two companies’ agreement will come out in 2015.

Such moves show that the big drug manufacturing companies have surrendered to the government’s call for price cuts on drugs, an industrial insider said.

The Korea Pharmaceutical Manufacturers Association planned to file a lawsuit against the Ministry of Health and Welfare earlier this month. There were about 10 small drug companies that volunteered to submit the suit, but six of them dropped out, according to the insider. The suit filed on March 7 and March 9 by the small four companies will be concluded this week.

“The major reason why drug makers gave up is that the Health Ministry has almost absolute authority over domestic drug firms, including determining prices for new products,” he said. If they fight the government, they may run into problems when launching new products, he said.

The price cuts will cost major drug companies 1.7 trillion won ($1.5 billion) in sales, according to the industry.

The largest local pharmaceutical company, Dong-A Pharmaceutical, said it will see a maximum of 100 billion won in losses as 95 products will be subject to the price cuts.

Hanmi said 196 of its drugs will face price cuts and will cost the company about 80 billion won in sales.

“The Health Ministry exercises great influence on the pharmaceutical market, as it intervenes in granting approval for new drugs, setting prices for them and examining production facilities,” an official at a drug maker said.

The financial sector is advising drug firms to diversify their business portfolios. “It would be better for Korean drug companies to find additional sources of income to offset falling profitability,” an analyst at Daishin Investments & Securities said.

Under the contract, LG will take part in launching and selling products under the brand name of Pfizer Vitals, which is a separate brand for Pfizer’s quality generics.

The partnership between LG and Pfizer is the first time Pfizer has teamed up with a Korean company. According to an industrial source, Pfizer said LG Life Science meet Pfizer’s standards.