China to let 11 refugees in consulates to defect

China to let 11 refugees in consulates to defect 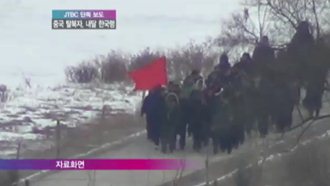 North Korean defectors holed up in South Korean consulates in China for years will be allowed to leave the country, a diplomatic source said yesterday.

A total of 11 North Korean defectors have taken refuge in three Korean consulates in Chinese territory in order to avoid being sent home by China. Beijing had refused to issue exit visas to allow them to come to the South.

But after a bilateral meeting between South Korean President Lee Myung-bak and Chinese President Hu Jintao, the diplomatic source said, “Some North Korean defectors, including 47-year-old Baek Yeong-ok, who is the daughter of a South Korean prisoner of war, and her two children, will likely be allowed to go to the South.”

Those defectors are a different group from the unknown number China has arrested in several places since early February, according to human rights activists, and their plight is attracting worldwide attention. If sent back to North Korea, they could be executed or sent to political prisons.

According to the source, Chinese authorities will allow six of 11 North Korean defectors who have spent more than 30 months in the consulates to leave the country in April. The remaining five will be allowed to leave later.

As part of the 2012 Seoul Nuclear Security Summit, Chinese President Hu had a bilateral meeting with President Lee Monday in Seoul and reportedly said he will “put efforts on resolving the matter respecting and considering the South’s position in the current issues surrounding North Korean defectors.”

Foreign consulates in China have been used by North Koreans trying to defect to the South. The Chinese government allowed refugees staying in consulates to leave the country until 2009, saying it was getting rid of illegal immigrants.

In 2009, China slammed that door for unknown reasons, refusing to issue exit visas to the defectors. Last year, it expelled two North Korean defectors who stayed more than four years in a Japanese consulate, but it demanded Japan sign a pledge that it would stop giving refuge to the defectors, and Japan complied.

The 11 North Korean defectors who will be allowed to leave have been caught in the South Korean consulates for at least three years.

Baek Yeong-ok’s elder sister successfully defected to the South in 2004, bringing the remains of her prisoner-of-war father. Baek tried to follow with her two children in 2009 and took refuge in the South Korean Embassy in Beijing. Baek previously told reporters she suffers from depression from being stuck in the embassy.

Do Hee-yun, president of the Citizens’ Coalition for Human Rights of Abductees and North Korean Refugees, said the release of the 11 doesn’t mean that China is easing up on all defectors who take refuge in consulates. He said that Beijing’s no-exit-visa policy has served its purposes well.

“By detaining the defectors for such a long time in the consulates, China is trying to warn defectors that it will be like prison if they go to a consulate,” Do told the Korea JoongAng Daily. “At the same time, China also discourages the consulates from accepting defectors because it is so troublesome to take care of them for several years.”