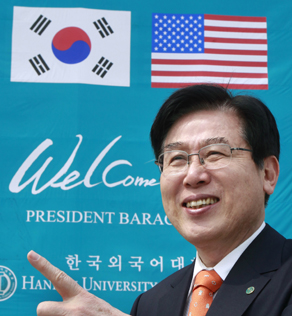 Park Chul, president of Hankuk University of Foreign Studies (HUFS), said he was deeply moved by the recent speech delivered by United States President Barack Obama on campus and that the speech was the most memorable lecture thus far in the school’s near 60-year history.

“It was the greatest lecture of all,” said Park, 63, in an exclusive interview with the Korea JoongAng Daily yesterday at his office in Imun-dong, Dongdaemun District, northeastern Seoul. Though it was a day after President Obama visited the campus, excitement still filled the air.

“The fact that his speech was given here at the Minerva Complex auditorium and not elsewhere shows that HUFS has become a global university and should continue carrying on the responsibility of nurturing more talented individuals that are able to compete on the global stage.”

Park’s comments came after Obama’s speech on Monday in front of some 700 students of HUFS before attending the two-day Seoul Nuclear Security Summit, which ended yesterday. HUFS was selected out of several Seoul universities by the White House as the site for the president’s speech. It was the first time that an incumbent U.S. president gave a speech at a university in Korea.

Q. Why do you think HUFS was chosen as the venue for President Obama to give his speech?

A. I’ve been told that several universities in Seoul had been recommended and researched [by U.S. officials] for their appropriateness for the president to give his speech, and at the end of the day, we were chosen. I think HUFS’ efforts to become a global university have paid off this time. We were chosen because we are a university dedicated to foreign studies based on a global mindset. We have been offering our students diverse opportunities to become global leaders, including our Model United Nations and study abroad programs. We have also partnered with 436 institutions throughout 79 countries, including 45 in the U.S. and three international organizations [including the Association of Southeast Asian Nations University Network and the United Nations-affiliated University for Peace]. Also, I’m told that President Obama himself is devoted to foreign language studies, in particular, Spanish. He told me [on Monday] personally that he sent his daughter to Mexico several days ago so that she could learn Spanish. Before he stepped up to the podium, we spoke in Spanish for several minutes. [President Park was a Spanish major at HUFS.] It comes naturally that such a president with a global mind would choose HUFS as his speech venue.

HUFS was unofficially notified in late February that President Obama would visit the school for a speech. How did you feel when you heard this?

I was glad and honored by such big news, but at the same time concerned until we were officially notified last week. Things could have changed any time if information that Obama was coming to HUFS had leaked. I was relieved only last week when the White House officially announced HUFS as the venue. There were no prior demands by the White House except for the fact that they wanted to set up the ceremony podium their way. We thought that they would set up the podium on stage; however, Obama gave his speech not on stage but in front, surrounded by the seats.

How did students, alumni and faculty members respond to the special event on Monday?

Around 700 students from HUFS’ Seoul and Yongin campuses were invited to listen to President Obama speak inside the auditorium, while another 300 students listened live at a nearby hall on television. We called off all morning lectures that day. Some complained we were overreacting, but it was inevitable for us to cancel the lectures.

I believe that listening to a world-class speech is also part of education and learning, not just listening to lectures and reading books. It was the greatest lecture of all. The lecture also planted seeds of hope in HUFS students of becoming global leaders. Matthew Duksun Lee, chairman of the board of directors of the Federation of Alumni Associations of the Americas for HUFS, also sent a written letter to the White House after the lecture on behalf of over 10,000 alumni of HUFS living in the U.S. The chairman stated in the letter that “it is with a tremendous sense of honor, joy and happiness that we welcome you to the campus of our alma mater” and that “your historical visit is one that we, the graduates, as well as the students and their families will remember for a very long time. Your every word and gesture will be ingrained in all of the students at HUFS and will leave an indelible mark.” The speech was also broadcast live on ABC and KBS and has generated global attention. I would say the speech itself was a historic one following President Obama’s speech made at Cairo University in June 2009.

How will HUFS take this opportunity to become more known globally, and what role should it hold in global society as a university dedicated to foreign studies?

We hold a very heavy role and responsibility in that we need to think about the curriculum we offer our students so that we can nurture more globally talented individuals and send more of them abroad to acquire a global mindset. In order to do this, we need more government support financially. There is a tendency that the government’s focus is on nurturing more information technology experts and engineers by providing more scholarships in those sectors. However, liberal and foreign studies are as important in carrying out diplomatic issues like South-North Korea relations.