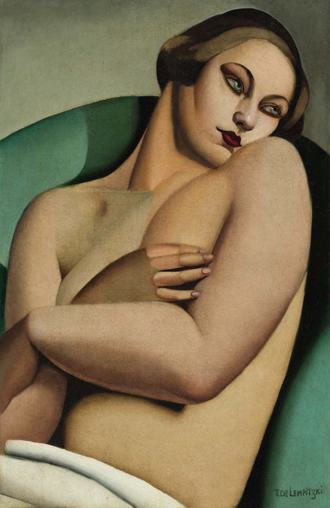 “Nu adosse I” (1925) by Tamara de Lempicka is expected to fetch nearly 5 million dollar when it is auctioned at Sotheby’s in May. [REUTERS/YONHAP]

NEW YORK - A rare, pristine Paul Cezanne watercolor, which has not been seen in public since 1953, is expected to sell for as much as $20 million at auction in May, Christie’s said on Tuesday.

The late 19th-century work on paper is one of Cezanne’s preparatory studies for his seminal “Card Players” series of five paintings, “Joueurs des cartes.”

Its whereabouts had been unknown for decades until it re-emerged from the collection of a doctor in Texas. The auction house found the drawing when it was working with the estate of Dr. Heniz Eichenwald, who died in September at the age of 85.

“They were very private people,” Christie’s president Marc Porter said, adding the work had been in the family for eight decades.

“The art was for their enjoyment rather than for public display. It was not hidden away in the house, it was enjoyed. But it wasn’t as important for their social position as it was for them,” Porter said.

Last year the catalog from the Metropolitan Museum of Art’s exhibition of Cezanne’s “Card Players” listed the work as “whereabouts unknown.”

Sharon Kim, Christie’s international director of Impressionist and modern art, said it had been feared the work had been lost to history by collectors and scholars. When a Cezanne watercolor was mentioned in the estate, Christie’s was intrigued.

“We checked and found it fit the description of the ‘whereabouts unknown’ piece and knew this was really likely it,” she said.

The study is most closely linked to the two-figure version of the “Card Players” series at the Musee d’Orsay in Paris.

“You can see the immediacy in the work, like the d’Orsay’s. He’s working through the process of how he’s going to execute this on canvas,” Kim explained, adding that it looks like it was painted yesterday. “The colors were astonishing,” she added.

The doctor’s estate was aware of the work’s importance but astounded by its estimated value.

Christie’s estimates the work will sell for up to $20 million. It will be the first time in a decade that the leading highlight of its sale of Impressionist and Modern Art has been a work on paper.

The work will be exhibited in Geneva in April before a New York showing ahead of the May 1 sale.

Earlier this week, Sotheby’s announced a find of its own, a painting by the pioneering female artist Tamara de Lempicka that is expected to fetch nearly $5 million at auction in May.

“Nu adosse 1” was featured in de Lempicka’s first major exhibition in 1925 in Milan, after which its whereabouts went virtually unknown - until a few months ago.

The artist’s “Catalogue Raisonne,” published in 1999, listed the painting with the designation “location unknown.”

The consignor, a West Coast construction company owner, had the 1925 work in his home for a decade before an art consultant recommended contacting the auction house, according to Sotheby’s.

The owner “had no inkling of what it was,” said Simon Shaw, Sotheby’s head of Impressionist and modern art, explaining that Lempicka was Polish and sometimes signed her work “Lempinski,” as was the case with “Nu adosse 1.”

The auction house was able to verify the work’s authenticity in large part because Lempicka’s 1925 exhibition had been photographed.

“It’s rare that you can actually prove that a picture is this great, long lost work as a result of a gallery installation photograph, as in this case,” Shaw said.

Shaw said the piece was a classic Lempicka, noting its Art Deco esthetic and depiction of 1920s-era female sexuality, which is so endemic to her work. “It’s very clean, elegant and glamorous, and epitomizes her work,” he said.

Prices for works by Lempicka have soared in recent years, with her auction record having been broken twice in just the past year alone. “Le reve” soared past its $6 million estimate to fetch $8.5 million at Sotheby’s in November.

“Nu adosse I” is estimated at $3 million to $5 million, but estimates do not include commissions that drive the gavel price up another 12 percent.

Shaw noted that there are few female artists within the Impressionist and modern field at that level. “She is now one of the most desirable of all female modern artists,” he said.

Lempicka, who died in 1980 at age 81, peaked relatively early in Paris during the 1920s and 1930s, and became a favorite of the Hollywood set, eventually settling in California for a time. She spent most of her last decades living the life of a glamorous European socialite.

Today, continuing a resurgence that began shortly before her death, Lempicka remains popular in Hollywood, with collectors including Barbra Streisand, Jack Nicholson and Madonna, who has featured several of her works in her videos, movies and stage shows. Reuters