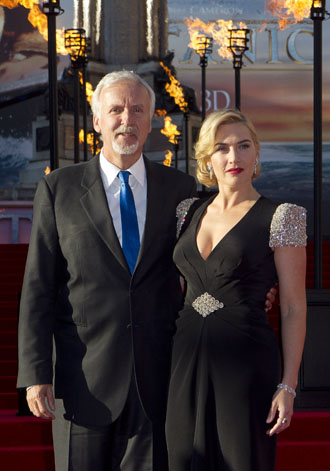 LONDON - Actress Kate Winslet and director James Cameron walked the red carpet in London on Tuesday for the premiere of the 3-D version of the hit movie “Titanic.’’

The 1997 drama - one of the highest grossing films of all time - will be available in British cinemas in 3-D in April, coinciding with the 100th anniversary of the Titanic’s doomed maiden voyage from southern England’s Southampton in April 1912.

“The 3-D enriches all of Titanic’s most thrilling moments and its most emotional moments,’’ Cameron told reporters. “It kicks the whole experience up to another level.’’

The director came to London fresh from his latest venture, which saw him descending seven miles below the surface of the Pacific to the deepest place on earth.

“One of the reasons I made Titanic was that I was fascinated by deep sea exploration,’’ he said. “It was an opportunity to dive in a submarine very deep at that time.’’

Winslet, who starred with Leonardo DiCaprio in the movie, joked that she would rather look away than see herself nude in 3-D.