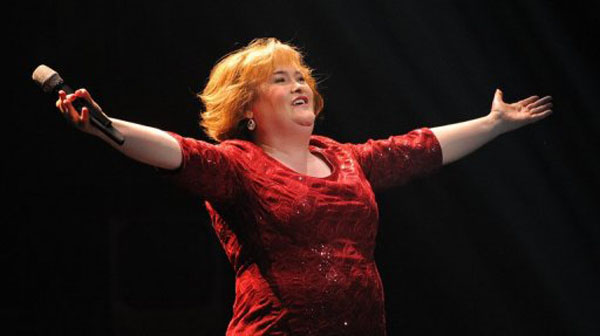 
NEWCASTLE, United Kingdom - Susan Boyle made a triumphant return to the stage on Tuesday at the premiere of a musical charting her rise from humble church volunteer to global superstar.

Wearing a glittering red dress, the 50-year-old received several standing ovations as she sang her signature tune, “I Dreamed A Dream,” at the opening night of the musical of the same name in Newcastle.

“We love you,” shouted out a member of the audience. “I love you too - see me outside,” replied Boyle, displaying the cheeky sense of humor that has won her millions of fans, some of whom had travelled from as far as Australia and the United States to attend the premiere.

Before this week, Boyle had not performed in public in Britain since singing for the pope in September 2010. Her two-song set after the musical ended left the Theater Royal buzzing with excitement.

“She was sensational,” said Cathy Garraway, a 49-year-old from Sydney. “It was worth coming half way around the world to see her tonight.”

It has been three years since Boyle, a devout Catholic, single and living on welfare in the small village of Blackburn, near the Scottish capital Edinburgh, became an overnight star.

It started when footage of her audition for a British television talent show went viral on the Internet.

In the video, the audience and the judges snigger as Boyle, looking dishevelled and more than a little eccentric, steps on to the stage.

Then she opens her mouth to sing “I Dreamed A Dream”, the hit from “Les Miserables” - and that was when her life changed.

The footage has since received about 500 million hits on YouTube, according to the musical’s producers. And she has gone on to record three albums that have sold more than 16 million copies worldwide.

The new musical is based on Boyle’s autobiography, “The Woman I was Born to Be.” It follows her from birth, when she was deprived of oxygen, through school when she was bullied for her learning difficulties, to the years spent caring for her mother.

The scene of her breakthrough moment at the audition had the theater audience cheering and whooping. But they fell quiet as the tale turned to the intrusion of the press and her near-breakdown when she lost the talent show final. AFP