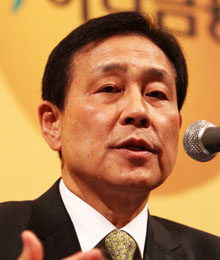 At his first press briefing as chairman of Hana Financial Group, Kim Jung-tai said he intends to reach out to the global market.

Kim has set the goal of making Hana one the world’s largest 50 financial groups by establishing a global network including China, the U.S., Indonesia and other markets.

“By 2015 we will raise our overseas net profit to 15 percent of the total,” Kim said. “We are looking at various strategies including strengthening our retail sales in China while expanding our clients among expatriate Koreans to the Chinese communities.”

He said he was also interested in expanding its presence in the U.S. market. Hana is in negotiations to acquire a controlling stake in Los Angeles-based Saehan Bancorp.

According to an official at the group, Hana has been preparing to expand globally for years.

“Establishing yourself in foreign markets is something that doesn’t happen in a single day,” said the official.

“In China alone we have educated and trained 150 Koreans for more than a decade and they have deep knowledge and understanding of Chinese culture and customs, which makes it easier for Hana to become localized.”

The group said it has also been hiring non-Korean students in Korea to work in Hana financial operations in their native countries.

Kim also showed a keen interest in the retirement market.

“The retirement market is getting bigger as baby boomers are now facing retirement,” Kim said. “We need to prepare in developing software targeting retirees.”

Kim also stressed the need of fully utilizing smartphone technologies such as electronic wallets, which can increase the group’s customer base.

He added that the group plans to use smartphone technology in financial products targeting retiring baby boomers.

Kim said he plans on enhancing the insurance sector of the financial group and will continue to stay alert to any interesting insurance companies that are put on the market. Insurance is considered a weakness of the group.

However, he stressed that he has no interest in pursuing ING Korea.

“There are a lot of participants already showing strong interest in ING,” Kim said. “We think it would be a good opportunity for them, but it is not for us.”