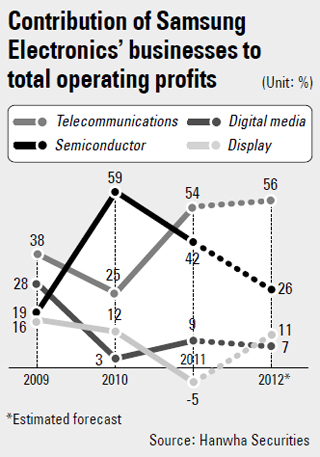 Samsung Electronics’ continued bullish run on the benchmark Kospi has caused the market bellwether to develop an even greater gravitational pull.

After rising to a new record high on Tuesday, Samsung Electronics remained above the 1.3 million won ($1,145) mark yesterday despite a slight drop - having jumped more than 20 percent from the start of the year.

The electronics giant accounted for 16.47 percent of the bourse’s entire market capitalization as of Tuesday, with its contribution to the primary market having grown roughly 1.5 percent since the beginning of March.

But what’s more notable is that Samsung Electronics’ performance isn’t being broadly shared with the rest of the stock market. As its stocks swelled throughout March, the Kospi remained caught between 2,000 and 2,040 points.

“Institutional investors have been facing a recent dilemma of whether to add [Samsung Electronics stocks] to their portfolios despite the considerable price tag, or risk lower returns by bypassing [the stock].”

This has led institutions to snap up Samsung Electronics by the barrel while unloading other stocks, such as chemicals.

The importance of Samsung Electronics in institutional investors’ portfolios has drawn keen interest in one question in particular: Can the market bellwether keep up its run? Analysts say yes.

“Samsung Electronics’ distinctive bullish run is due to a clear growth trend in profits,” said Han Bum-ho, an analyst at Shinhan Investment.

“The average quarterly operating profits of the company are expected to vault [last year’s record quarterly earnings of 5.2 trillion won during the fourth quarter], so the stock will rise further in the midterm.”

“The contribution of Samsung Electronics’ information and telecommunications business to the company’s total operating profit is expected to jump from 25 percent in 2010 to more than 56 percent this year,” said Ahn Seong-ho, analyst at Hanwha Securities.