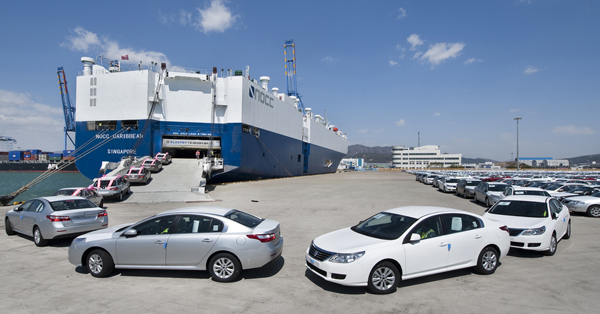 Vehicles produced by Renault Samsung Motors wait to be shipped out of the country in Busan recently. Exports made up more than half of Renault’s annual sales for the first time last year. Provided by the company


Renault Samsung Motors’ SM7 luxury sedan will be exported to China beginning this year under the name Renault Talisman, which is expected to give a boost to the struggling automaker.

It will be the second Renault Samsung model to be exported to China after the QM5 compact sport utility vehicle.

Renault SA, the parent company of Busan-based Renault Samsung, said the sedan will make its premier at the Beijing Motor Show beginning April 23.

Renault SA recently released a single teaser image of the SM7 Talisman, which is named after a Renault 2001 luxury concept car.

“The launch of the Talisman will enhance the overall competitiveness of the Renault brand and accelerate its development in China,” Robert Chan, the managing director of Renault’s Chinese operations, said in an interview.

Renault Samsung did not give details on the Talisman’s launch in China, but it is expected to be released there this year.

Despite its poor performance in the domestic market, the automaker’s exports are growing. Last year, exports made up 56 percent of its total annual sales. It was the first time that exports exceeded 50 percent. The company started exports in 2000 with a small number of vehicles. In January 2011, Renault Samsung started shipping the SM5 to Europe under the name of Latitude. The vehicle is sold through Renault’s regional network and helped the company post a record number of exports last year. In March 2011, its QM5 was introduced in China under the name Renault Koleos.

Renault Samsung says its exports this year are going to match last year’s or surpass them. The Korea-EU FTA is expected to provide new opportunities for the company as tariffs for vehicles with engine displacement of over 1,500 cubic centimeters will be eliminated in the third year from the effective date of the FTA, which was July 1, 2011.

Lee said Renault should roll out new models to increase domestic sales but there are few models in the pipeline. “The parent company Renault did not really make significant investment, and Renault Samsung is running out of steam,” he said.

The poor performance led to a reshuffle of the top management. According to industry sources, five executives have been replaced at the company. Vice President Park Soo-hong, Vice President Philippe Guerin-Boutaud, and senior executive managing directors Kim Joong-hee and Chang Ik-soon handed in their resignations on March 20. In February, executive managing director and communication head Lee Kyo-hyun left his post. Although the company tried to downplay the reshuffle, it is obvious that the automaker’s poor performance contributed to the change.

In an effort to overcome the recent slump in domestic sales, Renault Samsung is going on the offensive.

The company plans to launch upgraded models and expand its sales network this year. It said recently it would reorganize its existing sales network and open 18 sales outlets in the country by the end of this year. With the new outlets, the number of its dealerships will increase to 220 by the end of this year. It is also withdrawing some of its dealerships from high-rent areas. According to industry sources, it is transferring a sales outlet in Nonhyeon-dong, southern Seoul, to CXC Motors, the distributor of Mitsubishi-brand cars. The branch is located on a street lined with imported car dealers.

The company said there are new satellite cities being built in Seoul metropolitan areas and consumer buying patterns are changing, explaining its motive for reorganizing.