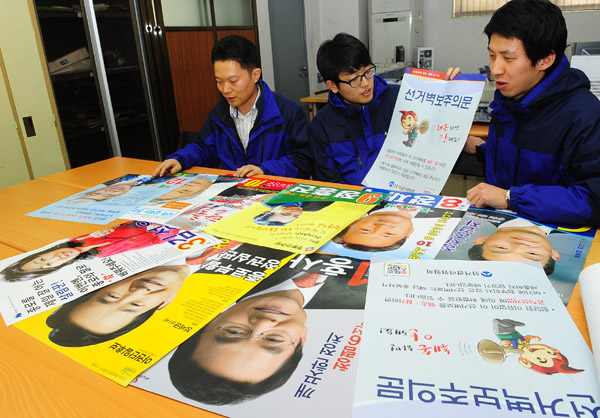 Employees of the Jongno District Election Commission in central Seoul prepare and inspect posters for the candidates yesterday, a day ahead of the 19th general election campaign. [NEWSIS]


The official 13-day campaign period for next month’s general elections started today. Fierce competition is anticipated among ruling and opposition party lawmakers. The results will serve as a litmus test for the presidential election slated for later this year. 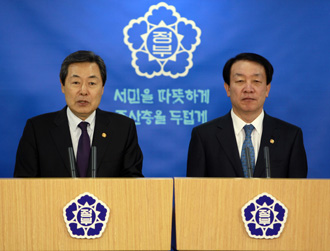 Minister of Justice Kwon Jae-jin, right, and Minister of Public Administration and Security Maeng Hyung-kyu request a clean election at the Central Government Complex in central Seoul yesterday. “The government will make every effort in order to make it a fair election,” Maeng said. [YONHAP]

While the main opposition Democratic United Party is aiming to win the elections by receiving a majority of seats in the National Assembly, the ruling Saenuri Party is also beefing up its campaign efforts to secure as many constituencies as possible.

Yesterday, Park Geun-hye, chairwoman of the ruling party and a presidential hopeful, visited the Jogye Temple in Gyeonji-dong, central Seoul, to win support from Buddhists ahead of the elections.

Farther south, DUP Chairwoman Han Myeong-sook visited Busan yesterday, a day after Park had stopped by, to urge voters to support the party.

Next month, she is expected to visit Jeju Island to commemorate the April 3 Jeju Resistance Movement in 1948 and on her way stop by Gwangju to support Saenuri Party lawmaker Lee Jung-hyun, who is often referred to as Park’s unofficial spokesman.

As opposed to the ruling party where Park will overlook campaign practices in general, the DUP is expected to bring several campaigners up front, including Han and Sohn Hak-kyu, the former opposition party leader.

Meanwhile, according to the National Election Commission, during the designated period from today to April 10, contenders and each of their spouses, campaign managers, assistants and accounting officials are allowed to hold campaigns by wearing over-the-shoulder straps and pasting labels on them representing the party they are running for.

Candidates are also able to give public speeches using loud speakers and hold debates with the voters during all hours of the day, except from 10 p.m. to 7 a.m.

The legislative elections will take place on April 11, and winners will serve as the country’s lawmakers for four years, from May 30 to May 29, 2016.

Koreans overseas started casting votes yesterday, starting with those in New Zealand. Absentee voting for the upcoming general elections will be held for two days on April 5 and 6 from 10 a.m. to 4 p.m.