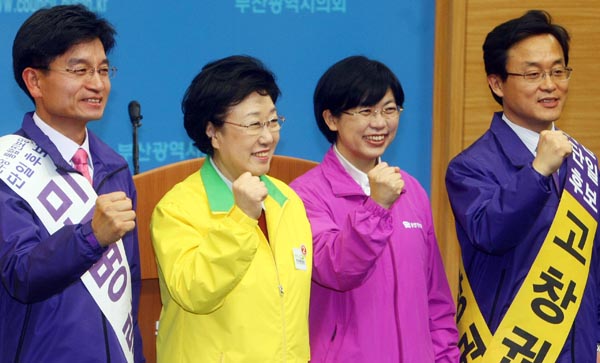 Liberals including Han Myeong-sook, second from left, the chairwoman of the Democratic United Party, and Lee Jung-hee, second from right, co-chairwoman of the United Progressive Party, pose with candidates at the Busan Metropolitan Council, yesterday. The leaders reaffirmed their determination to achieve victory in the upcoming general election. [NEWSIS]


The ruling Saenuri Party is struggling to quell controversies surrounding its candidates running for the traditional stronghold Busan area ahead of the general elections next month as the opposition continuously raises suspicion over their integrity and morals.

On Monday, the main opposition Democratic United Party raised strong doubts concerning Moon Dae-sung, a 36-year-old runner up for the ruling party in the Saha A District, Busan, claiming that he plagiarized his doctorate thesis submitted several years ago.

The DUP said in a release that “the paper Moon presented to Kookmin University in August 2007 overlaps considerably with a thesis written by a graduate student surnamed Kim that was submitted to Myongji University in February of the same year.”

The subject of both papers was on the impact of proprioceptive neuromuscular facilitation (PNF) stretching on the flexibility of taekwondo players. Chin Jung-kwon, a Dongyang University professor and a liberal critic of current affairs, tweeted that Moon’s paper is “a work of clear plagiarism.”

Moon, however, responded immediately in an interview with CBS radio on Monday that though he “did refer to other papers and did not source them, the idea of the thesis was unique” and that “the paper has been passed.”

The opposition party stood against Sohn, a 27-year-old political newcomer, by pointing out that she had obtained 30 million won ($26,422) as campaign funds - though not by canceling her housing lease contract as she had pledged, but instead by borrowing money from her parents. Sohn is expected to compete against Moon Jae-in, one of the rising stars for the DUP and a political heavyweight.

Saenuri’s nomination committee included both Moon and Sohn on its candidate list in the Busan area as part of efforts to bring in fresh faces and maintain support from its main political base.

As the ruling party faces challenges, DUP Chairwoman Han Myeong-sook headed to Busan yesterday for the third time after winning the party chairmanship in a bid to win public support. Han’s visit comes one day after Saenuri Chairwoman Park Geun-hye visited Busan on Tuesday, which political insiders say is a move to block pro-Park wind from blowing into the region.