IAEA keeping a close eye on nuke situation in North

IAEA keeping a close eye on nuke situation in North 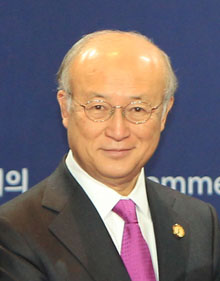 Amid heightened political tension regarding North Korea’s plan to launch a tactical artillery rocket, the UN atomic agency is closely watching the current situation to determine whether to accept the regime’s recent invitation into its nuclear facility.

Yukiya Amano, the director general of the International Atomic Energy Agency (IAEA), yesterday had a closed-door meeting with Lim Sung-nam, Seoul’s representative to the six-party talks on the North’s denuclearization.

A diplomatic official told the Korea JoongAng Daily yesterday that “they discussed how the [IAEA] is going to react to the current crucial situation, but nothing has been determined yet, and they are currently just keeping watch on what’s going on, considering the gravity of the issue.”

Another senior diplomatic official also told Yonhap News Agency that they “discussed how the IAEA would respond if North Korea goes ahead with its plan to launch a satellite on the back of a long-range rocket, including the issue of monitoring North Korea.”

When asked whether the agency is following the recent aid-for-denuclearization agreement and will carry out monitoring of nuclear activities in the regime even after the rocket launch, Amano told Yonhap News Agency that nothing has been determined yet and he doesn’t want to speculate.

“We are following the issue of the satellite launch carefully,” Amano said.

“We cannot be indifferent. But our focus is of course on monitoring nuclear activities.”

Pyongyang announced its plan on March 16 to launch a multi-stage, rocket-mounted satellite for what they say is domestic development in space, but the international community sees it as a cover for a long-range military missile test that breaches an international security obligation.

Washington officially said the missile launch would break the Feb. 29 bilateral nuclear agreement in which the regime pledged to halt its nuclear weapons program in exchange for 240,000 metric tons of U.S. food aid and allowing the IAEA inspectors to enter the country and confirm the suspension.

But Pyongyang insisted on going ahead with the plan, saying the projectile doesn’t carry a warhead-like payload and they will still invite the UN nuclear watchdog inspectors as part of their implementation of the nuclear deal.

The U.S. Department of State officially said it would be welcomed if North Korea invites the nuclear inspectors into the country, but they will still maintain their condemnations against the launch plan as a violation of the UN Security Council Resolution 1874 that prohibits any launches using ballistic missile technology.