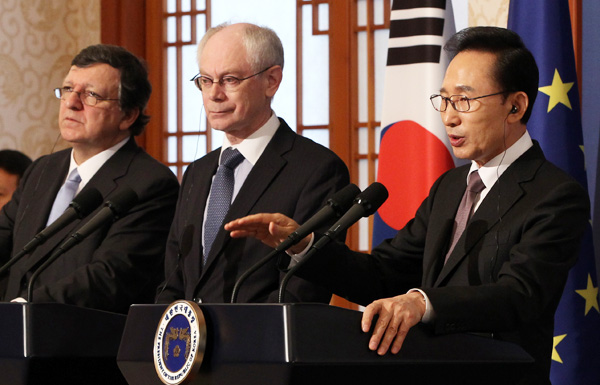 South Korea and Europe yesterday urged Pyongyang to refrain from provocative military acts, including a long-range artillery rocket launch planned for next month, and instead focus on improving the human rights of its people.

Lee and other summit members agreed on the necessity of easing political tensions on the Korean Peninsula as well as dissuading the North from abandoning its nuclear weapons program, including next month’s launch of a rocket-mounted satellite seen as a disguised test for a long-range military missile, which they say is a breach of an international obligation.

The North argues the rocket isn’t a weapon, but a satellite.

“The leaders shared their grave concern over North Korea’s announcement,” they said in a joint statement issued yesterday.

“The leaders together called on North Korea to refrain from the announced launch. They continue to urge North Korea to comply with its international obligations, in particular, by abandoning all nuclear weapons and existing nuclear programs.”

Van Rompuy pointed out the regime should divert its efforts to improve the human rights of its people and resolve the chronic food crisis in the country.

“I need to highlight the gravity of North Korea’s human rights situation and the problem of hunger and malnutrition,” he said. “This should be the first priority for North Korea, not missiles and nuclear weapons.”

He also added that he supports the South Korean government’s efforts to resolve the issue of North Korean defectors being forcefully repatriated to their homeland.

“We all agreed on the fact that North Korea’s long-range rocket test is a violation of a UN Security Council resolution and a provocative act threatening international peace and security,” President Lee told reporters after the meeting.

“Accordingly, we all unanimously agreed that North Korea should immediately scrap the launch plan and abide by international obligations.”

The joint statement also included a string of crucial global issues such as imploring the Syrian government to immediately stop all kinds of violence and human rights violations in the country, and dealing with global climate change and worldwide trade matters.