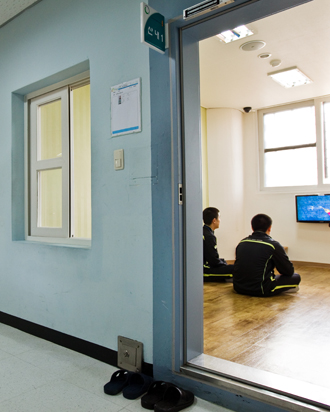 Juvenile offenders watch television during a break hour in a room at a detention center in Daejeon. By Kim Seong-ryong

Jang was born in Cheongju, North Chungcheong, and never met his mother. At the age of nine, his father dropped him off at an orphanage.

For the succeeding 20 years, Jang has been a troublemaker.

He started smoking in the third grade and got into gang fights in ninth grade. At 16, police arrested him during a fight and sent him to a juvenile detention center.

He only spent six months at the center, but Jang says the experience made him a permanent outsider from society.

Korea’s juvenile detention centers perform one function well - taking troubled teens off the streets - but do a bad job of giving them the help they need to straighten out their lives. They function more like holding pens than rehabilitation centers.

Statistics prove the point. Although the number of teenage offenders dropped from 2008 to 2010, from 123,000 to 95,000, the rate of second convictions for juvenile offenders increased from 26 percent to 36 percent in the same period, according to the Korean Institute of Criminology.

“People should know that crimes committed by teenagers are like a disease,” said Lee Seung-hyun, a researcher at the criminology institute, told the JoongAng Ilbo. “Juveniles, especially those who grown up as orphans, are driven to commit crimes because they don’t know how to communicate and interact with people. Just putting them in a jail can’t be a solution. We must treat them as doctors treat patients. We need to educate them and provide specific guidelines to help them adapt in their communities when they’re discharged.”

Jang’s experience is typical. After his six months in the juvenile detention center, he vowed to live a better life. But within a few days of his return to school, all the teachers and students had found out about his time inside the center. Two years later, at the age of 18, he was arrested for stealing a motorcycle and served another 18 months in a detention center in Cheongju.

“People avoided me like they do adult criminals when I got back to the school,” Jang said. “I needed someone I could share my worries with. At the detention center, all I got was cold surveillance. They succeeded in putting me away but failed to teach me anything to help me socially adapt. A few months later, I found myself being involved in other crimes.”

To get a first-hand look at how juvenile detention centers work, the JoongAng Ilbo, JTBC and Lee Joong-myeong, chairman of the Korea Juvenile Protection Association, visited a center in Daejeon and stayed for three days and two nights. Here is what we found.

The center doesn’t look like “Prison Break.” Toilets are separate from living quarters. The cells look more like rooms, with heated wooden floors and no bars like in adult prisons. Four to five boys share a room, and a 42-inch television is installed in each room. But the boys’ lives are monitored around the clock via CCTV. When one boy tried lying down on the floor, a stern warning came through a speaker on a wall.

The reporters check into the center and receive basic necessities, including green uniforms, with names and serial number stamped on them, underwear, soap, shampoo and toilet paper. In a 26-square-meter (280-square-foot) room, two teenage boys, 19-year-old Cho and 17-year-old Park, are sitting but doing nothing. Cho is in for stealing 400,000 won ($352) from an empty house. Cho was caught sniffing glue.

It’s time for the evening roll call. As in the military, the boys clean up their rooms before a teacher makes sure they’re all there. “Good night, sir,” the boys rumble. The lights go off except for one big fluorescent tube hanging close to the CCTV camera on the ceiling.

“We leave it on in order to prevent any problems, such as physical abuse and suicide attempts,” the teacher said.

The boys are under surveillance everywhere in the center: in their rooms, while showering, in the hallways and cafeteria, and even in the toilet. The room doors automatically lock after they are closed.

A morning call comes from the room’s speaker: “It’s time to wake up.” More announcements follow as the boys collect their bedding. “Class No. 1 go to the shower room now and the rest wait for your turn in your rooms.” In the shower room, a reporter faces an 18-year-old surnamed Hwang. Tattoos of dragons, demons and snakes cover his body. Hwang says he was a gang member in Gwangju, North Jeolla. The reporter says he can introduce Hwang to a self-support program that provides jobs and shelters, and he’s interested. “I really want to go but I’m kind of afraid of living alone again,” he said. “If I go back to my gang there are many friendly faces I can communicate with.”

It’s break time, but the boys are not allowed to leave their rooms. They only leave the building for one to two hours a day - physical activity hour. During the break, a series of chastisements come through the speaker. “Put your uniform back on.” “Sit tight and don’t lean back on the wall.”

“It’s time for dinner,” the speaker announces. About 30 boys leave their rooms and hurry to line up at the entrance to the cafeteria. The menu is bulgogi (marinated beef). It takes less than 10 minutes to finish. The boys rise and wash their trays. The most recent arrival has to clean the table. An announcement comes from the speakers: “Hyun, come to the infirmary for your pills.” Hyun, 13, was caught stealing 30,000 won. He needs sleeping pills because before he was detained, his custom was to cruise around at night and sleep during the day.

The lesson for the day is about hygiene of the mouth, and none of the boys are interested. The teacher is a nurse from the infirmary. Some drowse and others scribble in notebooks to kill time. When a boy tries to make a joke, an authoritative boy scowls at him and he shut up.

“If we react,” a boy explains to a reporter, “the class goes on longer.”

At 1 p.m., the reporters exchange goodbyes with the boys. A 17-year-old boy named Park gives a reporter an origami turtle he was working on during hygiene class as a souvenir.

“You’re not coming back are you?” he asks.