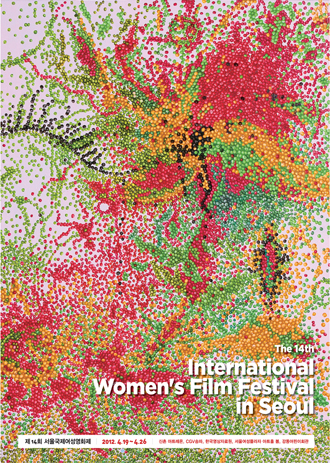 The official poster for the 14th International Women’s Film Festival in Seoul.

For over a decade, the International Women’s Film Festival in Seoul (IWFFIS) has shown the world through the eyes of the most prominent women directors. The 14th annual installment, which begins on April 19 and runs for eight days, will feature a total of 120 films from 30 countries that touch on a variety of issues including breast cancer, homosexuality and dysfunctional families.

Unlike previous years, when only one venue hosted the entire festival, 44 full-feature and 76 short films will be screened at various locations across Seoul. The Sinchon Artreon Theater, Korean Film Archive, CGV Songpa, Seoul Foundation for Women and Family and Gangdong Children Center are all participating in the IWFFIS.

The opening film is director Paula Markovitch’s “The Prize.” This autobiographical project centers on a mother and daughter who risk their lives to escape Argentina during its military dictatorship.

The Argentina-born director moved to Mexico and is now considered one of the most important female voices in Mexican cinema.

From top to bottom, still images from “Pink Ribbons, Inc.,” directed by Lea Pool of Canada; “Elles” directed by Malgorzata Szumowska of Poland; and “The Prize,” directed by Paula Markovitch. Provided by IWFFIS

“This film is a good example of how a country’s history can leave a trace, an echo, in an individual for a long time,” said Byeon Jae-ran, co-director of the IWFFIS alongside Lee.

This year’s IWFFIS will feature other prominent Mexican directors in its special “Mexican Women’s Cinema” segment, which includes 10 films like “The Good Herbs” by Maria Novaro, “Blue Ballon” by Izabel Acevedo and “Of This World” by Fernanda Valadez.

The “Asian Spectrum” section this year will focus on Japanese cinema from 1955 to present. Among the 16 films to be screened are “3.11: In the Moment” by Gasha Kyoko, which tells the intimate stories of the survivors of the March 11 earthquake.

One of the older films to be screened is “Girls of Dark” (1961) by Tanaka Kinuyo, which follows the life of a prostitute who is sent to a rehabilitation facility during the 1950s in Japan, when a law prohibiting prostitution was implemented.

The main theme this year is “hope.” Festival organizers said they tried to select films that address how women cope with difficult times and remain optimistic in the midst of political and social uncertainties.

“Just last year, there were so many events that challenged us all, from the death of Choi Go-eun [a screenwriter who died from a chronic illness] to the Fukushima nuclear disaster,” said Lee Hyae-kyoung, codirector of the IWFFIS, at a press conference for the festival last week in Seoul.

“This year, we tried to broaden our scope both geographically and spiritually to include a more diverse portrait of how women today, amidst all these uncertainties, are dealing with their problems and finding hope in their lives.”

According to organizers, one must-see in this section is “Elles,” directed by Malgorzata Szumowska of Poland and starring Juliette Binoche (“The English Patient”).

The film takes a look at sexuality through the perspective of an investigative journalist who meets two strong-willed, independent young women while writing an article about university student prostitution.

Another highlight of this section is “Pink Ribbons, Inc.,” directed by Lea Pool of Canada. This documentary focuses on the corporate involvement in today’s breast cancer campaigns, revealing how the fight against breast cancer has been reduced to “marketing campaigns.”

The 14th annual IWFFIS will also hold one competition section, with 17 short films from 26 countries. The 17 films, chosen from a pool of 344, will be competing for one of the four prizes worth $17,000.

The films in this section include “Seventeen in Summer,” a coming-of-age drama about 17-year-old Mi-jin and her mother, as well as “Turtle and Tears” by Taiwanese director Chou She-wei, about a 15-year-old who suffers from domestic violence.

During the festival period, there will also be a series of talks held with some of the directors featured in the screening schedule including Maria Novaro and Zanele Muholi.