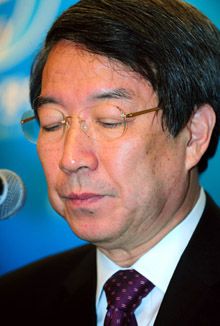 Chung Un-chan, former prime minister and chairman of the Commission for Shared Growth for Large and Small Companies, quit his job abruptly yesterday and said the Federation of Korean Industries makes fairness in the corporate sector impossible and should be reformed or shut down.

In a press briefing, Chung said the FKI is the major obstacle in spreading the concept of “shared growth” in Korea, or large companies coexisting more generously with small.

“FKI should be reorganized or consider disbanding,” Chung said.

Chung acknowledged the role the large conglomerates have played in the nation’s economic development, but said they have grown into a tyrannical power that have replaced past dictatorships. 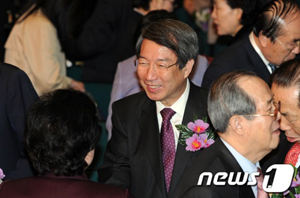 “The protection force [of conglomerates and their overpowering force] has been the FKI,” Chung said. “Other global businesses have taken social responsibility seriously, whereas Korean-born large businesses have disregarded economic justice and law and have been driven only by profit.”

He accused conglomerates of using their profits to award themselves hefty bonuses while small and medium companies struggle to survive.

He also criticized the government for weakly regulating conglomerates’ unfair dominance of their market on the excuse of advocating a free market economy.

Chung said the government should be more aggressive in preventing widening polarization between large and small businesses that could cause anger and social strife.

“There is a high chance of a social outburst when the accumulation of wealth goes off balance among people and only few get excessive fortunes,” Chung said. “When polarization widens, the concept of democracy can be threatened.”

An increased unemployment rate, household debt and collapse of small companies can be the causes to instigate social upheaval, he said.

Chung was supposed to lead the commission until the end of this year, but he hinted at resigning earlier.

“It is meaningless for me to hold onto the position,” he said. “And in fact, my resignation is the best way to spread the notion of shared growth.”

However, there is growing speculation that Chung’s resignation was political and that he might be positioning himself to get involved in December’s presidential election.

On a television talk show on JTBC on March 1, he said, “There’s nothing [I] can’t do for the country,” when asked if he intended to become the “president maker” for Ahn Cheol-soo, the software entrepreneur and Seoul National University professor.

Chung is a former president of Seoul National University.

“A democratized economy is the way our society needs to go forward, and I will do whatever is needed for the growth of our society,” Chung said. He refused to talk about his next step.

The FKI said it had no comment. “We think his words might have been made with political intention,” said Jo Yoon-suk at the FKI.