Korean restaurant by JYP makes its debut in the U.S

Korean restaurant by JYP makes its debut in the U.S 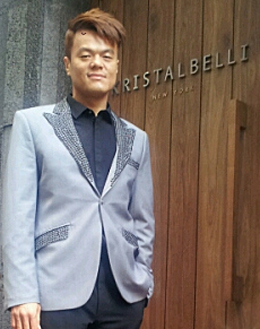 Music producer Park Jin-young has diversified into the culinary scene by opening an upscale Korean restaurant in Manhattan. Park, who is also the head of JYP Entertainment, held a press conference on the day of his new restaurant’s official launch and told journalists why he decided to open Kristalbelli.

“The Korean wave is sweeping around the globe, and I have so many foreign friends who ask me to recommend a decent Korean restaurant. I could never find an eatery to recommend, so I decided to open one,” Park said on March 26.

As well as the glitzy decor, the main attraction of the pricy restaurant is that it uses a special grill made of crystal to cook meat faster. The grill also has a vent system that allows smoke to be sucked in from below, minimizing the meaty odor that often hovers above.

“Most grills used in Korean restaurants take forever to cook the meat and you reek of smoked meat afterwards. Thus, I spent 30 million won [$26,370] of my own money to invest in developing the grill,” Park said.

After three months in development, the grill was deployed in the restaurant, and a patent for it is pending.

Park said that he plans to open restaurants in Los Angeles, Tokyo, Beijing, Shanghai and Seoul in the near future.