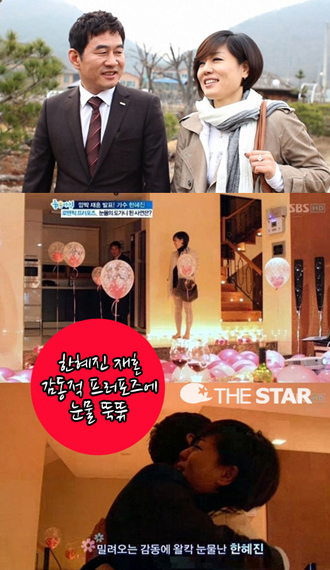 Han Hye-jin will walk down the aisle for the second time, the 46-year-old singer said in a surprise announcement on an episode of SBS’s “Good Morning” on March 29.

Her fiancé is a businessman named Heo Joon-seo, who is six years her senior. Han said the two are long-time friends and that she happened to run into Heo after 20 years apart.

“Despite the fact that he is the head honcho of a business, at home, he helps me out with all the chores,” Han boasted.

The two were engaged in January, and though they have yet to set a date for the wedding, planning is well underway.

On the same show, viewers were treated to a glimpse of the couple’s new home, built by Heo for his bride-to-be.

In the special episode, Han also spoke of the hard times she lived through in 2009 when she divorced after 10 years of marriage, and also of her father’s death.