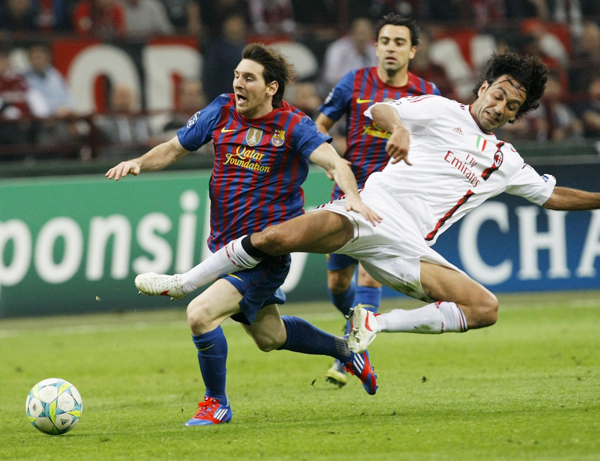 LONDON - AC Milan frustrated Barcelona in its attempt to grab a valuable away goal in the Champions League on Wednesday, holding the defending champions to a 0-0 draw while Bayern Munich won 2-0 at Marseille to stay on course for the semifinals.

Barcelona had 62 percent of possession but failed to score in a Champions League match for the first time in two-and-a-half years. When the Spanish side did create chances at San Siro Stadium, it was thwarted by Milan’s experienced defense, goalkeeper Christian Abbiati and some lenient refereeing from Jonas Eriksson.

The closest Lionel Messi came to scoring was when he had a first-half goal ruled out for a clear offside, leaving the quarterfinal finely balanced ahead of next week’s second leg at Camp Nou.

Barcelona will have home advantage as it aims to progress to a meeting with Chelsea or Benfica, but Milan has the defense to protect a lead if it manages to score an away goal.

Such calculations are unlikely to trouble Bayern after Mario Gomez and Arjen Robben scored in the first leg of the German team’s quarterfinal in France. Bayern, which will host the final in May, is on course to face Apoel Nicosia or more likely record nine-time champion Real Madrid.

“We have a return leg yet to play, so I don’t want to talk about the semifinal and who we will be playing,’’ Bayern coach Jupp Heynckes said. “I don’t really have any doubts, but I have respect for Marseille.’’

Barcelona’s form was far below that which brought a 7-1 win and five goals for Messi in the previous round against Bayer Leverkusen. The likes of Abbiati - with a string of saves - Alessandro Nesta and Luca Antonini were able to frustrate Barcelona with some top-class defending.

Milan was lucky not to concede a penalty after Alexis Sanchez broke into the area at the end of a rehearsed move. Sanchez stayed upright despite being barged from behind by a defender but was brought down when Abbiati threw himself across the Chile forward’s feet.

Neither challenge was ruled a foul by Eriksson.

Messi drew a diving save on the ground from Abbiati in the 88th and Cristian Tello looked sure to tap in the rebound but Antonini raced back to throw himself in front of the ball, celebrating his block as though he had scored.

Kevin-Prince Boateng took too long to shoot and was blocked after Barcelona midfielder Sergio Busquets put his teammates under pressure with a misplaced pass. Soon after, the ball broke to Zlatan Ibrahimovic and the former Barca striker softly headed it to Robinho, who smacked a wild shot over the bar with only goalkeeper Victor Valdes to beat.

It was the first time Barcelona had failed to score in the Champions League since a 0-0 draw against Rubin Kazan in November 2009.

“There’s a first time for everything,’’ Barcelona coach Pep Guardiola said. “Milan is happy with the result, and that’s a real compliment for us. Not scoring away from home does penalize us a bit, as I think we will have to score twice to go through.

“They are strong in so many aspects, I don’t think one goal will be enough. But the pitch will be better than this one, so there’ll be a bit more speed. We’re used to playing to win.’’

Out of form, hampered by injuries and suspensions, and jeered by its own fans, Marseille barely tested Bayern keeper Manuel Neuer at Stade Velodrome and slipped to its eighth defeat in the past nine games.

Gomez put four-time European champion Bayern ahead with his 11th goal of the competition just before halftime, with Marseille goalkeeper Elinton Andrade to blame for letting the ball slip under his body.

The goal was Gomez’s 11th in this season’s Champions League and put the Germany striker, who scored four in Bayern’s last Champions League match, just one behind Messi in the tournament’s list of leading scorers.

Robben made the game safe in the 69th, swapping passes with Thomas Mueller on the edge of the penalty area and curling the ball past Andrade.

“We put our heart and soul into it, but they were superior to us,’’ Marseille coach Didier Deschamps said.

Former Marseille winger Franck Ribery was jeered throughout by his former fans and pointedly turned to applaud the Bayern supporters when he was substituted to a chorus of whistles late in the game. AP