After the smartphone, MP3 makers struggle to survive

After the smartphone, MP3 makers struggle to survive 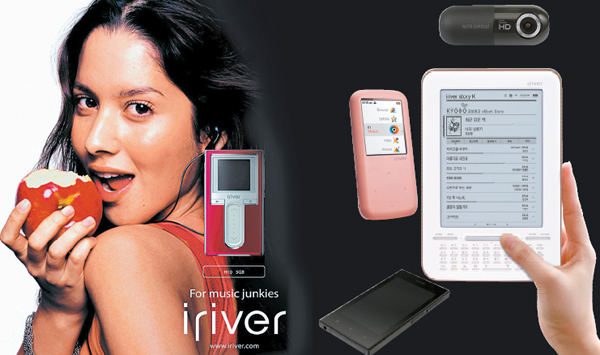 The company was confident it could beat its main competitor.

The ad came at a time when iriver accounted for one-fourth of the global MP3 player market and held the No. 1 spot in the United States, the home of Apple.

The firm, formerly known as Reigncom, was launched in 1999 by a former executive in the semiconductor export division at Samsung Electronics and quickly emerged as Korea’s premier start-up icon.

However, as boundaries between tech gadgets fell with the rapid advent of the so-called smart devices - sparked by Apple’s iPhone in 2007 - iriver began to struggle. The situation with Cowon System, a former second-tier tech player, has been just as bleak.

Now users are no longer burdened by multiple gadgets when they have all-in-one devices such as smartphones and tablet PCs.

“I have bought MP3 players, PMPs (portable media players), digital cameras, electronic dictionaries and navigation systems over the past decade,” said Park Yoon-jo, an office worker in her early 30s.

“But it’s been several years since they were put in storage because my iPhone does it all. It’s a shame they have become useless, but I have no choice.”

In order to survive, these firms are developing alternative tech gadgets ranging from car black boxes to e-readers, but as latecomers to those fields, their prospects are grim. 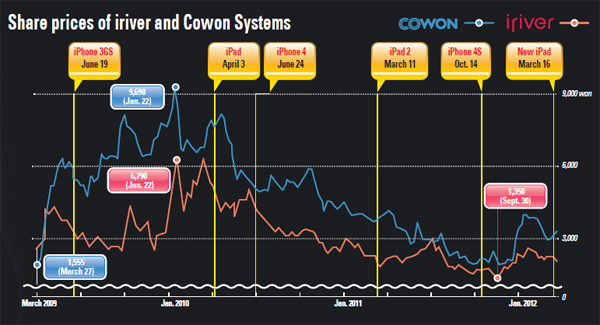 Tainted glory
In 2008, a year after the iPhone was unleashed globally, Korean media outlets started pouring out articles to issue warnings that Apple might cannibalize Korean MP3 makers. Just one year later, iriver reported losses in both operating profit and net profit for the first time: 23.9 billion won ($21 million) and 29.2 billion won. Losses have persisted since then. Sales have been in a free-fall, down from 144.1 billion won in 2009 to 77 billion won last year, according to regulatory filings.

Its stock prices on the Kosdaq have underperformed in recent years in tandem with the management difficulties. Having peaked at 6,790 won as of Jan. 22, 2010, iriver shares closed at 1,960 won yesterday, down 64.5 percent since the peak. By contrast, Apple’s share price nearly doubled from $350.44 to $617.62 in the past year.

In a desperate effort to reclaim affection from the public, iriver in 2010 went so far as to release commercials that said, “We bit our lips while trying to ambitiously bite an apple. We realized that we should have made more efforts to win your love rather than fight against the world, and we regret it.”

But the bitter acknowledgement seems to have done little. The MP3 market pie that belonged to iriver has gone to Apple’s iPhone as well as its iPod lineup, including the shuffle and nano.

Apple currently accounts for around 70 percent of the global MP3 player market, according to industry data.

Lee Gi-hyung, former journalist and author of the 2010 book “A method to fight against a titan,” points out that iriver’s fall is largely indebted to its conceit, which prevented it from properly recognizing the danger posed by Apple.

Cowon Systems, now one of the three remaining MP3 player makers in Korea, has taken a similar path to iriver. It posted operating and net losses for the first time last year. Its net losses amounted to 11.7 billion won.

Its revenue has been on the downward slide since 2009 and sales dropped to less than half to 54 billion won last year compared to 2009’s 135.5 billion won.

The third producer is Samsung Electronics, which used to make Yepp MP3 players and now simply retails MP3 players under the relative safety of the Samsung brand name. 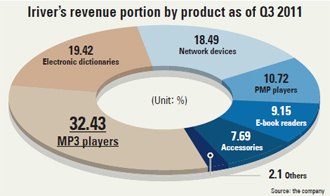 In search of a niche market

Regarding the radically worsened performance, Cowon’s president and CEO Park Nam-gyu told reporters last Friday at a shareholders meeting: “Changes in the market were much bigger than we expected - with drastic reduction in the sales of MP3 players and PMP. That hurt our performance in 2011.”

MP3 players make up some 30 percent of Cowon’s product portfolio by sales revenue; PMP players for around 55 to 60 percent, according to Kim Yong-suk, a spokesman with Cowon.

CEO Park stressed that Cowon would make an aggressive foray into black boxes for cars, a sector where growth has been notable recently. Car black boxes are one of a series of items that Cowon has come up with recently with the hope of carving out a niche market.

Car black boxes serve a similar function to those on airplanes, keeping a detailed record of what happens to an automobile during an accident.

Last December, Cowon unleashed a product named “Auto Capsule.” It plans to release three or four more such car black boxes by the year’s end, Kim said, although over 100 large and small producers, including existing navigation system makers, are waging fierce war against each other.

Cowon also jumped on the bandwagon of portable smart players, a new breed of gadgets that are similar to the iPod touch but with wider screens, earlier last year. Their version is called D3 Planue, running on the Android operating system.

Iriver’s new products in the past several years have included e-readers and Kibot, a robotic playmate for kids that it supplies to mobile service provider KT.

Will those efforts bear fruit? Most market experts have their doubts.

“Some claim those MP3 player producers still have a chance to find a niche market with other gadgets, but I am pretty skeptical,” said Greg Roh, a senior analyst with HMC Securities. “People want to carry as few devices as possible. That’s why not only portable audio players but also digital cameras and navigation systems are doing so bad nowadays. When even iPods are being cannibalized, it is meaningless to talk about minor companies. It seems highly unlikely, at least at this moment, that they will recover.”

He mentioned iriver’s e-reader as an example. It first unveiled its e-reader Story in 2009 and then released the upgraded version Story K in January this year at the reduced cost of 99,000 won.

“There are so many predecessors out there that already provide a perfect user interface, which makes it hard for iriver to produce and sell e-readers at prices that it considers proper,” the analyst said. “They will need to be extremely extraordinary to beat them but realistically it’s a near mission impossible.”