Iraq could be bonanza for Korea

Iraq could be bonanza for Korea 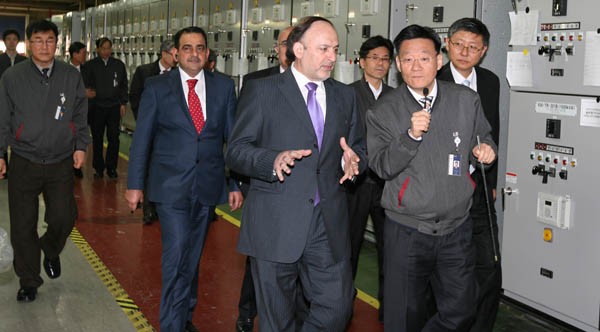 
At a LS Industrial Systems plant in Busan yesterday, workers were surprised by unexpected visitors from Iraq.

Deputy Minister Amer Abdul Majeed of the Iraqi Ministry of Electricity and three other officials visited the Busan plant where devices for power generation are being produced.

“I am very impressed by the company’s technology in power transmission solutions, especially those that will be exported to Iraq,” Majeed said.

He seemed envious of cutting-edge production facilities and technology used in the green power business, such as the smart grid project, an official at LSIS said.

The Iraqi power minister is on a five-day trip to Korea to see how Korean businesses operate and to get more information on Korean companies that might make investments in the national reconstruction of Iraq.

Korean businesses are winning large project orders from Iraq where the infrastructure was largely destroyed in the nine years after the U.S. invasion.

Korean businesses have had strong ties with the Middle East since the 1980s and participated in major development projects in the region. They continue to win big construction and plant projects in countries such as Saudi Arabia, Qatar and Kuwait.

Iraq has surfaced as a market full of potential for Korean companies that avoided it during Saddam Hussein’s time or the often chaotic years after he was overthrown.

LSIS is accelerating efforts to penetrate the market for power infrastructure as Iraq tries to solve its power shortage problems.

LSIS won its first power substation contract from the Iraqi government last year and a second project this year.

“It is the first time in the past 60 years that a non-European company won an order from Iraq, especially in the power system industry,” the company said.

This year, the company won an additional 35 power substations.

Last Friday, Samsung Engineering said it was awarded an engineering, procurement and construction contract to build a $1 billion gas and oil separation plant (GOSP) in Basrah, southern Iraq, as part of the second phase of the West Qurna oil field development project.

According to the company, the GOSP will separate crude oil extracted from the region into oil and gas to produce about 460,000 barrels of oil a day.

“Since Iraq heavily relies on its oil production, it is likely to increase oil production aggressively to make profits that are needed for reconstruction,” said Park Ki-seok, CEO of Samsung Engineering.

According to a branch of the Korea Trade-Investment Promotion Agency in Baghdad, Korean businesses are gaining traction in Iraq because of their technological abilities and low bids on costly projects.

More than 90 percent of the government’s budget comes from oil, Nam said. “Now it is starting to invest in social overhead capital,” he said.

More development projects are expected to fall in the laps of Korean companies as the two governments are seeking wider cooperation. Iraq is the third-largest oil producer in the world and is in need of power plants, houses and roads.

The ministry forecast such orders from Iraq will amount to $100 billion at a minimum.

The Iraqi government officials requested Korean businesses to actively participate in housing and power plant projects. They also promised incentives for Korean companies if they take part in the retail, chemicals, automotive and agricultural equipment industries.

Nam acknowledged there remains challenges in financing projects in the unstable nation, and that the government tends to pay when projects are completed, a risk that some Korean companies won’t get paid for stalled projects.