LTE reaches every nook and cranny of country

LTE reaches every nook and cranny of country 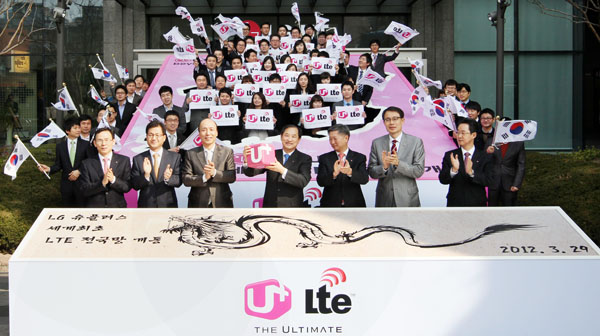 
Amid heated competition among the nation’s three mobile carriers to entice customers to switch to fourth-generation, long-term evolution plans, LG Uplus yesterday completed and launched a nationwide LTE network. The company claims it’s the first in the world to do so.

The cellular service will be available in 86 cities around the country, along all highways and in subways, airports, train stations, mountain areas, tunnels and underground markets.

They cover 99.9 percent of the Korean population, the company claimed. Every subscriber can make equal quality phone calls and downloads of data through the network regardless of where they are in the country.

The nation’s third mobile provider has spent over 1.25 trillion won ($1.1 billion) on the network. The company said it also plans to launch in October an additional LTE network in the 2.1 gigahertz frequencies spectrum, which it acquired in a government auction last July, to relieve overload amid a rising number of LTE-enabled smart phone users.

Frequency bands are like channels that deliver calls and data. The higher the number, the better the band. Currently SK Telecom and LG Uplus use 800 megahertz, while KT uses 1.8 gigahertz. The 2.1 gigahertz band is known as a “golden frequency” providing the best quality. SK and KT failed to obtain that frequency range.

“We aim to become the No. 1 in LTE with quality service and we believe that will help us become No. 1 among mobile service carriers,” said Lee Sang-chul, LG Uplus vice chairman, at a celebration at the company headquarters in central Seoul yesterday.

The three mobile service providers are competing fiercely in the next-generation mobile business.

SK and KT are set to launch LTE networks across 84 cities next month.

Currently, SK Telecom has the largest number of LTE service subscribers at 1.73 million, followed by LG Uplus with 1.46 million and KT, the last to join the market, with 400,000.

Both KT and SK Telecom made their own announcements about their services yesterday.

KT said it would double its monthly limit for downloadable data from three gigabytes to six gigabytes for subscribers with 62,000-won fixed monthly fee plans.

SK Telecom, meanwhile, tried to hook attention with free content offers. It said it will offer gift points worth 20,000 won to subscribers of monthly fee plans of 62,000 won or higher. With the points, subscribers may use video-on-demand services or buy some 80 types of content such as applications, games and cartoons from T Freemium online content mall.

“Once all the carriers have established nationwide LTE networks, service will be the key to attracting more customers,” said an SK Telecom spokesman. “The content we offer will be our competitive edge.”