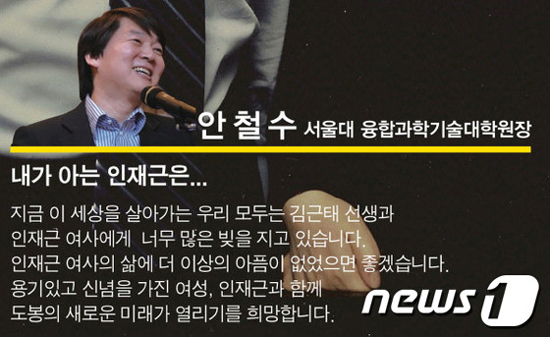 With less than two weeks before the April 11 legislative elections, software mogul Ahn Cheol-soo is shaking up the political arena once again, saying he could possibly run for office.

Ahn, dean of the Seoul National University Graduate School of Convergence Science and Technology and founder of antivirus software company Ahn Lab, has kept mum on the issue whether he would run in the upcoming general or the December presidential elections. Avoiding overwhelming media attention, the popular mentor of the younger generation suspended his public lectures for seven months.

However, Ahn gave a lecture on Wednesday at Seoul National University and hinted at a possible run.

“If I could be used as a tool to make a positive change in society, I can bear even politics,” Ahn said.

Ahn stressed that his politics will not be biased.

“If I participate [in politics], I won’t abandon the values of communities by being biased to the ideology of a certain political arena,” he said. “The conservatives and liberals shouldn’t be enemies, but be complementary.

“Whoever takes power, if he or she can’t resolve the social polarization and disputes and create jobs, people don’t have any interests in their politics.”

Both ruling and opposition parties were made nervous by the popular software mogul’s comments that could make a significant impact not only on the April elections but the presidential election, given the previous Oct. 26 Seoul mayoral by-election.

At the time, Ahn’s support for then-candidate Park Won-soon - especially his sincere letter encouraging Park’s running - apparently helped him significantly. Park had only 5 percent of support in local polls before the endorsement, but won the big race with nearly 50 percent of votes.

For this April election, Ahn yesterday publicly supported In Jae-geun, an opposite Democratic United Party candidate running in Dobong A District in northern Seoul and wife of the late liberal icon Kim Geun-tae.

On Twitter, Ahn said: “We all owe very much to Kim and In. I hope Dobong District will see the new future with the courageous woman, In Jae-geun.” Ruling Saenuri Party members told the JoongAng Ilbo that Ahn is apparently sided with the opposition party. “It seems to be apparent that he is considering running in the presidential election,” a Saenuri Party core official said.

Another Saenuri official also said, “He looks like criticizing both the ruling and opposition parties, but I think he is eventually attempting to help the opposition.”

Experts agreed on the opinion.

“He is highly likely to follow the campaign strategy of Park Won-soon, running in December’s presidential election as an independent opposition candidate,” Shin Yul, a politics professor at Myongji University, told the Korea JoongAng Daily yesterday. “At this moment, Ahn can’t gain power in the ruling Saenuri Party, which is tightly controlled by interim leader Park Geun-hye.

“His influence is still huge, and he once again supported a liberal candidate, In,” Shin continued. “Although the ruling party is leading many opinion polls, the political map will dramatically be reversed soon by Ahn’s appearance.”

Chin Jung-kwon, a popular liberal critic of current affairs, also bet that Ahn will run as a liberal candidate, and he will compete with presidential front-runner Moon Jae-in in the opposition party’s primary. “Ahn and Moon will compete with each other, and after the competition, they will support each other as running mates, creating significant synergy [to the opposite DUP],” Chin said on Twitter on Wednesday.

Yun Hui-wung, a senior researcher at the Korea Society Opinion Institute, also said, “As the opposition parties are currently leaning too far left, he seems to think he could target the vacant political arena [moderate left].”