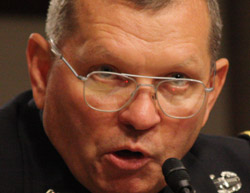 The chief of U.S. Forces Korea requested a beefing up of the U.S. Air Force’s capability in South Korea amid rising tension on the Korean Peninsula over North Korea’s missile launch program.

“We do not have a full combat aviation brigade there,” Gen. James Thurman said during a hearing at the U.S. House Armed Services Committee Wednesday, testifying about the security situation in the South. “I have asked the department as well as the Department of the Army and back through [the U.S. Pacific Command] and the Joint Staff to look at adding that battalion back that was repositioned out of there to meet requirements for the war in Iraq and Afghanistan.”

Military experts told the JoongAng Ilbo that the U.S. once stationed three squadrons of Apache combat helicopters in the South, but two of them were moved out of the region under the George W. Bush administration. The remaining squadron does not maintain full-fledged combat capability, they said.

Thurman, who commands around 28,000 U.S. forces in the South, cautioned against an attack from the North, which he said can hit the South with little or no warning. He said the North continues to improve its ability to attack the South, in particular, Seoul.

“Our deterrent capability is based on U.S. and [South Korean] military readiness,” he said, adding that he is looking at “how we can build readiness at best value.”

His remarks came as the North appears to be moving ahead with its first long-range missile test in three years, which is largely viewed as a military provocation toward the South and the international community.

On March 16, the North announced that it will put the Kwangmyongsong-3 satellite into orbit aboard long-range missile Unha-3 between April 12 and 16 to mark the birth centennial of the North’s founder Kim Il Sung, which falls on April 15. UN Security Council Resolution 1874 issued in April 2009 banned the North from conducting tests using ballistic missile technologies.

Peter Lavoy, acting U.S. assistant secretary, speaking before the same U.S. House committee Wednesday, said that Washington has suspended the food aid plan. The missile launch plan “reflects their lack of desire to follow through on their international commitments, and so we’ve been forced to suspend our activities to provide nutritional assistance to North Korea,” Lavoy said.