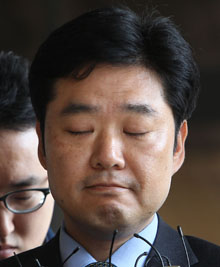 Investigation into the key Blue House officials’ link to destroying evidence of the illegal surveillance of a civilian has officially begun.

Prosecutors stated yesterday that Lee Young-ho, 48, former senior secretary to the president for employment and social welfare, will be summoned today for his involvement in destroying evidence related to the 2008 Blue House illegal surveillance.

Earlier this week, a public attorney surnamed Lee was summoned by prosecutors for handing 20 million won ($17,584) to Jang Jin-su, 39, a former public ethics official of the Prime Minister’s Office, in August 2011 to keep silent on the link between the Blue House and the illegal surveillance - allegedly on the orders of Lee Young-ho.

Choi Jong-seok, 42, then a staffer at the Office of the Senior Secretary to the President for Employment and Social Welfare under his boss Lee Young-ho, was likewise summoned for the first time by prosecutors yesterday to verify if it was under his orders that Jang on July 7, 2010, destroyed computer hard disks of the officials who were involved in the surveillance operation of a Korean businessman.

He was also questioned whether he was following orders from higher-ups and over his role in providing Jang with 40 billion won in attorney fees.

Lee In-kyu, former head of the public ethics division of the Prime Minister’s Office, was also summoned yesterday to be questioned on the Blue House’s involvement. The public ethics division was accused in 2010 of conducting an illegal investigation in 2008 of Kim Jong-ik - former CEO of NS Hanmaum, a subsidiary of KB Financial Group - who uploaded a video clip lampooning President Lee Myung-bak. After investigation, the prosecution indicted seven officials from the Prime Minister’s Office, including Jang, Lee In-kyu and Jin Gyeong-rak, a senior labor affairs official, but failed to find evidence to link the Blue House to the scandal. Their appeals are awaiting ruling from the Supreme Court.

Jang’s attorney Lee Jae-hwa, also a member of the Democratic United Party’s committee on presidential corruption, said, “After searching Jang’s residence on March 28, they took his cell phone and name card holder” in order to “check who Jang met with recently.”