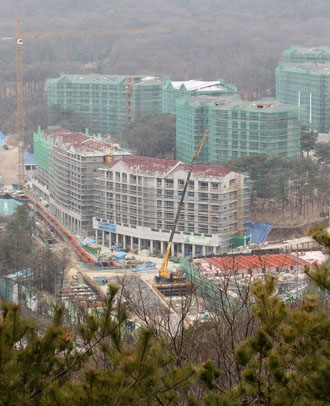 The 14 luxury “Pine Tree and Spa” condos are under construction at Ui-dong, northern Seoul close to Bukhansan National Park. The Seoul Metropolitan Government accused 31 officials on Wednesday of approving an exceedingly tall high-rise luxury condo complex, which is criticized as harmful to the landscape of Mount Bukhan. By Kim Do-hoon

The Seoul Metropolitan Government has accused officials of approving an exceedingly tall luxury condo complex project in a natural preserve near Mount Bukhan in northern Seoul.

The city government said on Wednesday that the Gangbuk District Office has allowed builders to construct condos whose heights are about 3.16 to 3.58 meters (11.4 foot) higher than what is allowed by the city.

As of now, 14 of the buildings at “Pine Tree and Spa” complex are being constructed and 10 of them, which are projected to be six- to seven-stories tall, have violated the ordinance.

Seoul said they will assign responsibility to the officials who had poorly managed the project. The city had already discharged members of the city’s urban planning development committee who approved it in 2008.

The accused officials also designated the land for the project as a residential area in order to approve the project.

The land that the city government has called into a question is 14-3 Ui-dong, Gangbuk District in northern Seoul. The city government thinks that the land shouldn’t be designated as a residential area because three sides of the site are surrounded by Bukhansan National Park and a stream crosses the southern region of the land. Seoul said there is no other residential complex in the area.

“We will assign responsibility to the 31 officials involved in the approval,” auditor Hwang Sang-gil of the Seoul Metropolitan Government told the JoongAng Ilbo. “We also dismissed six committee members from their positions.” Seldom does the city government run a self-inspection over a project that it has itself approved.

The city government said that it has been conducting an audit since December after receiving a direct order from Mayor Park Won-soon. The project’s approval drew his suspicion when he observed the construction site, which seemed to be situated in a nature conservation area.

The project is also being criticized for marring the beauty of Mount Bukhan. The city government said that builders have cut into about 10 meters of the mountain in order to build an access road to the condo complex.

The Korea National Park Service, a national parks management agency, warned the Gangbuk office that the complex should be built 50 meters away from the Bukhansan park boundary in order to secure prospect rights and prevent potential damage, but the office ignored the warning and approved the project without any explanation.

However, Seoul said it is almost impossible to cancel the project because it already is 40-percent complete. They are not going to ask police to press charges against the officials because neither Seoul officials nor builders exchanged any bribes or money in the approval process.

The Pine Tree project has a total of 332 units and each is presumed to be worth about 4 billion won ($3.51 million). The complex is projected to be finished by the end of January 2013.