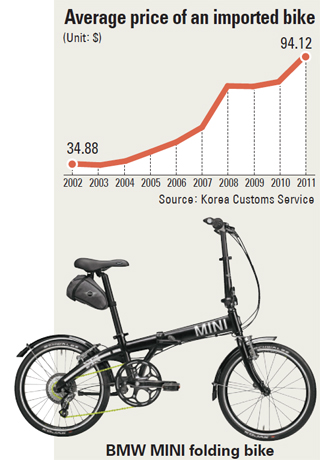 Korea is importing an increasing number of bicycles as people choose to commute in an eco-friendly and healthy way.

Hybrid bikes, a combination of a racing and mountain bikes, are most popular among commuters. Popular foreign brands include Louis Graneau from Canada, Scott Sports from Switzerland and Trek Bicycle from the United States. Those brands are priced between 400,000 won ($350) and 800,000 won.

“The average price of a bike is on the rise as more people are willing to shell out for premium bikes, upgrading from 200,000 won models,” said Yoo Jeong-yeop, a manager at LS Networks’ bicycle distribution unit.

Bicycles manufactured in the U.S., Germany and Britain are more expensive, running from $746 to $1,288.

The priciest bike imported last year was a $1,380 model from Spain. Parts for the Spanish bike are manufactured in Taiwan, but they are assembled in Spain.

Riding the trend, BMW launched its MINI folding bike in Korea on Monday, a companion for the company’s MINI Cooper sedans. When folded, the bike fits in the trunk of almost any car. “Park & Ride” is the theme of the bike, the company said, but it can also be taken on public transport.