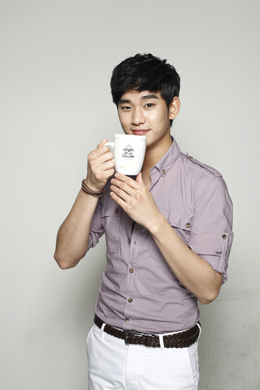 Hallyu actor Kim Soo-hyun has become the face of “Angel-in-Us” coffee chain store.
“Those in their twenties and thirties are our major target market. Thus we thought it was crucial that we select someone with enough pull as well as a soft and mellow image like Kim Soo-hyun,” said a representative from the Korean coffee chain.

The franchisor said that Kim successfully filmed the TV commercial at a store in Mugyudong in Seoul on March 24. A throng of crowd gathered around the store to catch a glimpse of the heartthrob causing quite a chaos.
The TV ad is slated to air from April 1 and the “Making-of” footage will be available online shortly after.

On March 21, Kim also became the face of Cass beer and bringing his tally of exclusive contracts to exceed more than 15.
When the announcement of Kim’s contract with Cass was announced, Kim’s agency estimated that
The star’s combined deals would bring in more than 5 billion won ($4.5 million) for the young star, who skyrocketed to fame while appearing in the MBC drama “The Moon Embracing the Sun” (2012). Kim is also known for his roles in “Dream High” (2011) and “Giant” (2010).
By Carla Sunwoo [carlasunwoo@joongang.co.kr]