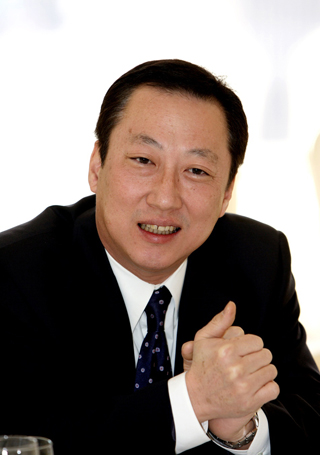 Doosan Corporation said its board of directors named Park the group’s chairman at a meeting yesterday.

The 57-year-old’s appointment came after his older brother Yong-hyun decided to step down, the group said.

The older Park was named an inside executive of Doosan E&C at the builder’s shareholders’ meeting on the same day.

He is going back to Doosan E&C three years after he left there to serve as chairman of the group.

As the older Park has passed the baton to his younger brother, Doosan’s tradition of “brotherhood management,” whereby they took turns managing the group, is now back to normalcy.

Yong-hyun and Yong-maan are the fourth and fifth sons of Park Too-pyung, son of the founder and first chairman of Doosan Group, who passed away in 1973.

The group management by the brothers is a tradition after the father gave the chief post of Doosan Group to his eldest son Yong-kon, then his second son Yong-oh, who recently passed away, and then his third son Yong-sung before 2005.

The tradition to share the title temporarily ended when the late Park Yong-oh opposed Park Yong-sung’s nomination as chairman in 2005.

However, the brotherhood management system was restored in 2009 when Yong-hyun was named chairman.

The incoming chairman is recognized for his aggressive restructuring and merger and acquisition (M&A) efforts since the 1990s.

He has played a leading role in transforming Doosan from a consumer goods manufacturer into a global heavy industrial group.

“Park has made a major change in the business direction of Doosan through active M&As,” an official at the group said.

He also tried to secure original technologies and expand into overseas markets, the official added.

Its overseas sales increased from 12 percent to 61 percent during the same period.

The slogan in a TV commercial for Doosan - “People are the future” - is also a brainchild of Park.

The chairman interviews graduates and undergraduates at annual recruitment fairs every year both at home and abroad.

The new chairman is also known for his strong affection for IT products.

He was one of the first to use the iPad before it was officially launched in the Korean market, and he frequently tweets to communicate.

Park joined Doosan Construction as an entry-level employee in 1982, and has worked in various subsidiaries, including Doosan Beverage, formerly Dongyang Beer, Doosan Corporation and Doosan Infracore.