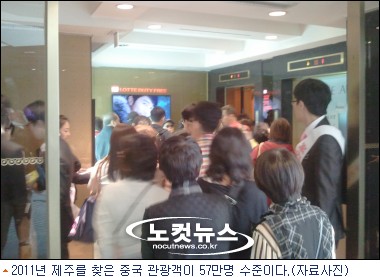 Lotte Duty Free said yesterday it will kick off what it calls a “Talk Concert,” a special lecture which gives A to Z advice on recruitment for 300 Chinese students in Korea interested in working at Korean companies. It will be held April 6 at Korea Tourism Organization auditorium.

“We aim to hold this event on a regular basis, three to four times every year,” said Park Chang-young, a marketing employee at Lotte. “Given that Korean companies are expected to participate in the event, the April’s lecture will serve as an essential communication channel between Korean firms and Chinese students who are studying in Korea.”

After the lecture, the company is taking Chinese students to a Lotte Duty Free Family Concert where popular K-pop stars will perform.

Lotte said it will give away as prepaid gift cards to Chinese students who posted reviews of the concert on Chinese social networking site RenRen.

Sales to Chinese customers accounted for 17 percent of total sales in 2011 and Lotte Duty Free said the proportion will grow year by year.

Customers merely have to show Chinese passports or foreign resident cards. The event goes through until April 22.

“We expect more Chinese customers to visit Korea during the promotion period as Qingming, one of China’s major holidays, falls on April 4, “ said Cho Hoon, a spokesman for Hyundai.

According to Hyundai, sales to Chinese customers went up 110 percent in 2011 compared to the previous year, much higher than year-to-year growth of all foreign shoppers, which rose 35 percent.