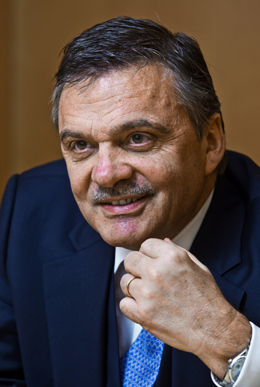 Rene Fasel, the winter sports representative of the International Olympic Committee executive board, recently visited Pyeongchang for three days to check in on preparations for the 2018 Winter Games.

The 62-year-old former Swiss ice hockey player and referee said that while everything seemed to be on schedule, Korea needs to widen its winter sports portfolio in order to widen support for the Winter Olympics.

“For the 2018 Pyeongchang Winter Olympics to be a success, Korea needs to widen its prospects in other winter sports,” Fasel said.

With decades of experience in winter sports, Korea needs to overcome the reality that it is at the moment only “distinguished in skating and short track,” he added.

But Fasel did say that he “wholeheartedly agreed” with Gunilla Lindberg, chairwoman of the IOC Coordination Committee, who said preparations for the Olympic Winter Games in Pyeongchang were coming along “smoothly.”

“It’s an amazing feat to have prepared for the Winter Olympics for over 10 years,” Fasel said. But he warned it’s too early to let the guard down. “Till the Olympic flag is raised, Pyeongchang has a lot of homework to do, and there is not a lot of time.”

Fasel, who is also a dentist commissioned by the IOC to study the dental treatment of Olympic athletes, earned an honorary doctorate degree on March 23 from Hangyang University for his contributions to sports culture after the IOC’s first inspection for the Pyeongchang Olympics.

He expressed with laughter in an exclusive interview with the JoongAng Ilbo that “Since I am a Hanyang University alumnus, I’ve become Korean.”

He said that though he has traveled all over the world on almost a weekly basis as an IOC member, “the hospitality in Korea is always so warm - almost to a surprising extent.”

Fasel started a career in ice hockey in Switzerland, moving on to becoming a referee after he retired in 1972, and from 1994 to present is the president of the International Ice Hockey Federation.

The 2010 Vancouver Winter Olympics was a success due to the “fervent citizens,” Fasel said.

“The highlight of the Olympics was the United States versus Canada ice hockey championship, during which the citizens ran out into the streets in excitement.”

Fasel said he sees a need for Koreans to expand their horizons in the winter sports beyond just ice sports.

He also emphasized the importance of completing the construction of the Olympic venues, especially the bobsledding track. “There needs to be a stadium in order for the athletes to practice,” he said.

Although North American and European athletes tend to have an edge in winter sports, Fasel said that if the Olympics succeed in Korea, “it will contribute to the standardization of winter sports in Asia.”

If there is one thing the Pyeongchang Olympics Organizing Committee needs to be wary of, Fasel said, it is “an abandoned stadium after the Olympics.” He recalled that after the 1994 Winter Games held in Norway, a 14,000 seat stadium was abandoned after the games.