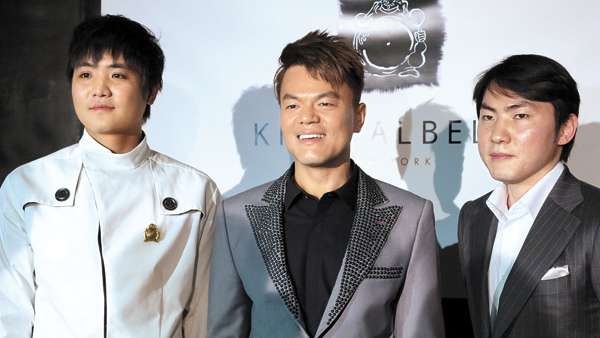 Park Jin-young, center, head of JYP Entertainment, poses at the opening party of Kristalbelli, the upscale Korean restaurant he launched in New York. On his sides are

Park was pretty hands-on with the development of the restaurant: He even constructed a special hot grill after studying it for three months. According to Park, the grills are
made of a single piece of crystal with infrared heat, sucking away the smell of grilled foods. He said the idea was to minimize the smell of Korean food on clothing. “Existing hot grills just emphasize the function of grilling, but I considered the design as well,” he said. “I was inspired by a potbellied, generous and friendly guy and adopted that to the design. I added fun to grill.” 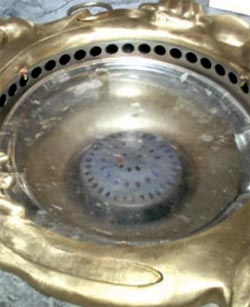 The restaurant offers traditional Korean foods, but in a sophisticated and luxurious presentation, which was exactly Park’s intent. He said that he was motivated by the fact that his friend Chow — the owner of Chinese restaurant “Mr. Chow” and also a renowned interior designer — opened the Chinese restaurant for the same reason: to show that Chinese food can be upscale, too. Unique menus, which are developed from traditional foods, are served at Kristalbelli. One of them is chadolbakibab, or rice with marbled beef on the top.

He said he got the idea from Japanese sushi and also from how good rice tastes with marbled beef. Park also developed his own cocktail, called “JYPlum.” He plans to create other cocktails or items on the menu named after singers of JYP Entertainment. In front of the restroom on both floors are televisions screening K-pop music videos. Headphones designed by Park are also equipped in the waiting areas.

Park said that he hopes to open more branches overseas in Los Angeles, Beijing, Shanghai and Tokyo in addition to a Seoul branch. He also hopes to make them into something more than just an eatery: Park said his restaurants will become places where people can experience Hallyu and Korean culture while eating high-quality meals.