Japan to intercept rocket if threatened

Japan to intercept rocket if threatened 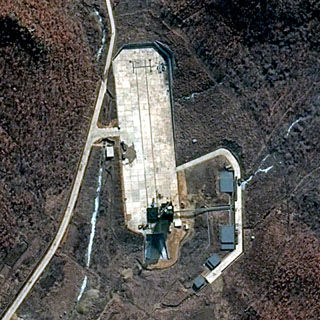 This Wednesday satellite image provided by DigitalGlobe shows trucks, fuel tanks and work underway on the gantry next to a mobile launch pad at Tongchang-ri on North Korea’s northwest coast. [AP/YONHAP]

Japan yesterday ordered its military to intercept the North Korean missile Pyongyang plans to launch next month if it poses a direct threat to Japan, a scenario the government considers unlikely.

“We don’t expect it to fall onto our territory. We would like the public to carry on with their daily lives and their work normally,” Chief Cabinet Secretary Osamu Fujimura told a regular news conference.

North Korea has said the rocket’s trajectory will be southwards and that it will not impact neighboring countries. 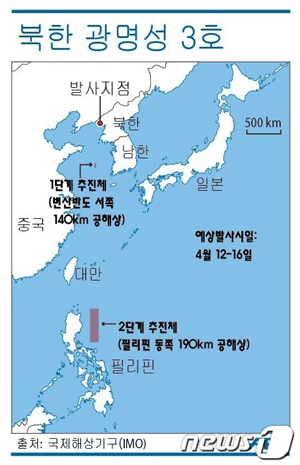 Interceptor missiles will be fired only if the North Korean missile or parts of it appear to be falling toward Japanese territory, threatening its people or their property.

In the run-up to North Korea’s launch of a long-range rocket in April 2009, Japan issued a similar order. The rocket flew over Japan, and Tokyo did not fire any interceptor missiles.

The missile launch is due to take place between April 12-16.

Meanwhile, the Obama administration will overhaul its approach toward North Korea if it presses ahead with the rocket launch, a senior Pentagon official said Thursday.

James Miller, nominated as undersecretary of defense for policy, made clear that the U.S. won’t be able to fulfill what it agreed to do in a Feb. 29 aid-for-concession deal with North Korea.

“My view is that if North Korea goes forward with this test, we will stop this aid and stop the other steps that we had intended to take and have to have a complete reconsideration of where we go in the future,” he said in a Senate confirmation hearing.

He is currently serving as principal deputy undersecretary of defense for policy. If confirmed, he will replace Michele Flournoy, who retired in February.

After high-level talks in Beijing in February, the U.S. said it would provide 240,000 metric tons of food aid to the North.

It was an apparent reward for Pyongyang, which pledged to suspend some of its nuclear and long-range missile activities.

The two sides also reportedly agreed to a set of social and cultural exchanges, including a concert by a North Korean orchestra in the U.S.

He pointed out North Korea’s missile and weapons of mass destruction programs pose a “direct and serious threat” to U.S. regional allies and partners.

They also have the “potential to become a direct threat to U.S. territory,” he said.

He stressed, however, the need for continued efforts to resolve the North Korea issue diplomatically.

“I believe the United States must work with our allies and other key partners in the region and internationally on diplomatic solutions to the range of pressing concerns we face with North Korea,” he said.

“Under the appropriate conditions, direct diplomatic engagement with North Korea is important as well.”