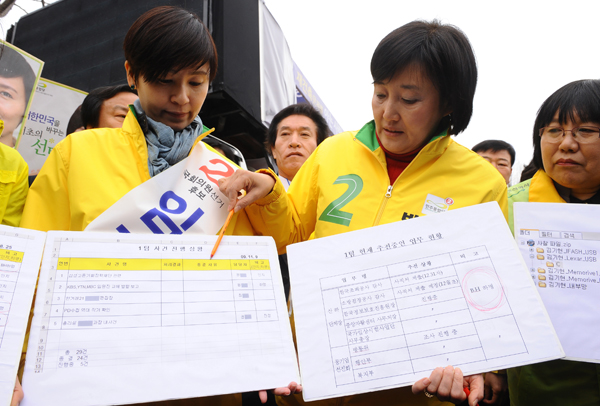 The Prime Minister’s Office conducted illegal surveillance of a number of people across the country over the past three years, mostly those critical of the current Lee Myung-bak administration, reporters of state-run KBS said yesterday, dropping the biggest bombshell revelation yet ahead of the April general election.

Members of the KBS labor union, who are mostly reporters and producers, said during an online news program dubbed “Reset KBS News” yesterday that they “exclusively obtained” 2,691 reports written by officials of the public ethics office of the Prime Minister’s Office.

“An official of the public ethics office had all of these documents,” Sim In-bo, a KBS reporter, said. “Considering the fact that much of the evidence was already destroyed, we expect the actual number of reports to be huge.”

The prosecution said yesterday that the reports were already obtained by the Seoul Central District Prosecutors’ office in 2010 when they were investigating the illegal surveillance scandal against a local businessman. But the prosecutors referred to only a part of the report, focusing only on the businessman, and submitted them to the court as evidence. 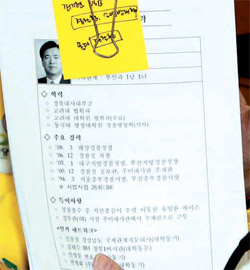 A reporter from “Reset KBS News” told the JoongAng Ilbo yesterday that “We asked to bring the reports to the Supreme Court.” But given the fact that it’s difficult to obtain evidence unless he or she is involved in the case, suspicion is rising that Jang Jin-su, a former official for the Prime Minister’s Office, helped them obtain the documents.

The reports, written by the first investigative team of the public ethics office, show the subjects of the surveillance were varied, from former lawmakers to executives of state-run corporations, conglomerates, opposition party members, professors and labor unions who were mostly critical of the current administration.

The labor union of Seoul National University Hospital was put on surveillance because the union members hung a poster lampooning President Lee Myung-bak on the wall of their office.

A board member of a local private school was monitored because he had dinner with Jeong Tae-keun, an independent lawmaker who had conflict with Lee Sang-deuk, President Lee’s older brother. Other ordinary citizens critical of the government - an obstetrician running a local hospital, a pastor and a magazine journalist - were also under surveillance.

Anti-government civic groups were also monitored, the reports say, such as those organizing candlelight vigils against the government, a labor union of the freight industry and a local labor union of Hyundai Motors.

“I was so shocked by the fact that they monitored me because of the single poster, and it was conducted not only against an individual, but the overall society,” Lee Hyang-chun, secretary general at the SNU Hospital labor union, said in the program.

A professor at Korean National Police University appeared in the report saying: “The professor wrote a column in the Chosun Ilbo criticizing the procedure of [the president’s] appointment of the president of the Constitutional Court.”

The program said there were 150 reports on the Mugunghwa Club, an association of former and current policemen known for being critical of the current administration. A scholarship foundation that Samsung Group Chairman Lee Kun-hee founded was also monitored.

Journalists were not the exception, the reports say. Some reports were titled “the current situation in the YTN news agency’s labor union strike” or “the ongoing situation in the KBS labor union.” A report written on Nov. 9, 2009, says “Check the former writers of the ‘PD Diary’ program and the editor in chief of Hankyoreh 21 Magazine.”

At the time, producers and writers of the “PD Diary” program of MBC were on trial for charges of defaming the government with their broadcast on U.S. beef and mad cow disease. Hankyoreh 21 supported the program.

It’s not illegal for the public ethics office, which is supposed to monitor corruption of government officials and politicians, to conduct surveillance against the government, the “Reset KBS News” program said, but most of the monitoring did not deal with corruption, but with personal information, their attitude to the current administration and even private lives.

A report on the former head of the National Police Agency, Kang Hee-rak, details his personal information, career records and personal relationships. It evaluates Kang’s leadership, personal network and capabilities by awarding him stars in each area. It reads: “He shows he is capable in the workplace in general but has some conflicts with the Seoul Police Agency’s head.”

Former Minister of National Defense Lee Sang-hee was also on the evaluation report saying “Lee had conflicts with the National Intelligence Agency due to his dictatorial leadership.” Lee was replaced five months after the report was written, the program said.

A string of ministerial-level officials and loyalists of late president Roh Moo-hyun were included in the reports, such as: Lee One-koo, former South Chungcheong provincial governor opposing the current government’s Sejong City project, and Lee Sei-woong, former president of the Korea Red Cross who was appointed during the Roh administration. The officials appointed by Roh on the reports all resigned in the middle of their terms, the program said, during the current Lee administration.

A report shows that the Prime Minister’s Office even allegedly followed every moment of a high-ranking government official’s affair with a woman in 2009.

The report described their secret dates and conversations, saying “they lightly kissed then walked into the apartment.” The official resigned two months after the report was written, the program said.

“Now it’s time to talk about the resignation of President Lee Myung-bak,” Park said. “They say the surveillance was ordered by ‘BH,’ which apparently refers to the Blue House.

“The reports were apparently used not only by the Blue House but by the ruling Saenuri Party,” Park argued. “We now see the answer to why interim leader Park Geun-hye has been so passive in mentioning the issue.”

Concerns are escalating in the ruling party.

“If it’s true, it is really shocking,” Lee Sang-il, spokesman of the ruling party’s campaign headquarters, said in a statement yesterday.

“It’s an apparent violation of human rights and crimes destroying democracy, just like the wide range of illegal bugging previously conducted by the Kim Dae-jung administration against journalists and government officials.”

Interim leader Park Geun-hye also told reporters yesterday, “Those who broke the law should be thoroughly investigated and punished regardless of their positions.”