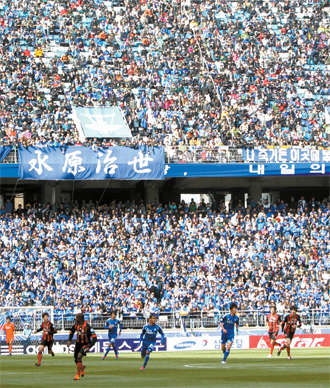 Players from the Suwon Samsung Bluewings (blue) and FC Seoul (red) perform during their K-League derby at the packed Suwon World Cup Stadium, known as “Big Bird,” in Gyeonggi yesterday. A total of 45,192 fans were in attendance, a new stadium record. Suwon won 2-0 and now sits atop the league table. [NEWSIS]