State theater in Greece to accept food as payment

State theater in Greece to accept food as payment 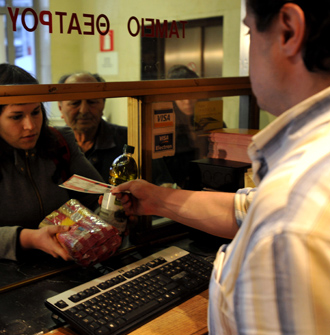 A woman gives pasta and a bottle of oil in exchange for a theater ticket in the northern port city of Thessaloniki, Greece, on Friday. [AP/YONHAP]


THESSALONIKI, Greece - Theater is meant to provide food for thought, but in a Greek city it also feeds the needy.

In response to the country’s acute financial crisis, the State Theater of Northern Greece has launched a series of performances where, instead of cash, spectators can hand over food at the ticket booth.

The campaign opened in Thessaloniki on Friday evening with dozens of people, clutching bags of flour, sugar and pasta, lining up to see Irish playwright Enda Walsh’s “Chatroom.”

More than 20 performances of five different plays will run until early May, with actors working for free. Tickets for the theater normally cost 5 euros to 20 euros ($7-$27).

“We are creating a solidarity network, during the crisis, that works in terms of direct democracy,’’ Hadzakis said. “We intend to continue next year too, as, unfortunately, it looks as if the crisis is set to endure.’’

Greece’s debt woes reached a head in early 2010, after successive governments mismanaged its public finances for years. It is now surviving on international rescue loans from its partners in the euro zone and the International Monetary Fund, in exchange for which harsh austerity measures were enforced that saw pensions and salaries slashed amid repeated tax hikes.

The cutbacks deepened the economic recession, and tore holes in the country’s social fabric. Unemployment has hit a record high of 21 percent, and thousands of Greeks depend on church and municipal soup kitchens for sustenance.

Many also flock to charities that provide free health services - originally intended for hundreds of thousands of illegal immigrants that have flooded into Greece in recent years from Asia and Africa, hoping to move on to other European countries.

“This is the least we can do,’’ “Chatroom” actress Marianna Avramaki said. “The children that will be getting the food are in great need.’’

Offerings at the ticket booth were mostly nonperishable foods such as bottles of olive oil, rice and pulses, while others proffered powdered milk and washing powder.

“This food doesn’t cost much,’’ he said. “This is a kind of initiative that must spread through our society. We must start to look at the people around us, and open our eyes.’’ AP