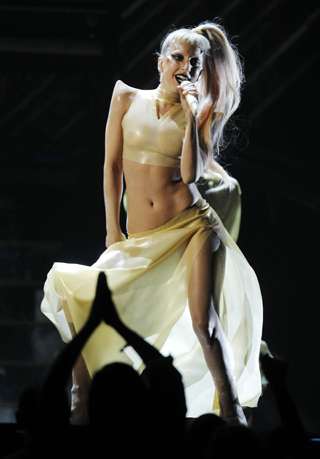 The Lady Gaga concert in Seoul, set to take place on April 27, has been raised from a rating of 12 years and
up to 18 and over.

Those who have previously purchased tickets for the “Born This Way Ball” will be able to get refunds.

Fierce opposition from some Christian groups, accusing the artist of promoting homosexuality as well as partaking in explicit sexual acts during performances, led to the shift in the government’s position.

The “Born This Way Ball” tour is the singer’s third world tour and will kick off at Olympic Hall in southeastern Seoul.

Lady Gaga made her debut in 2008 with the single “Just Dance.” The 26-year-old U.S. singer is one of the world’s most popular artists at the moment and is known for her outrageous outfits and wild antics on stage.

She has an army of devoted followers around the world and is the most-followed person on the planet with more than 20 million Twitter subscribers.