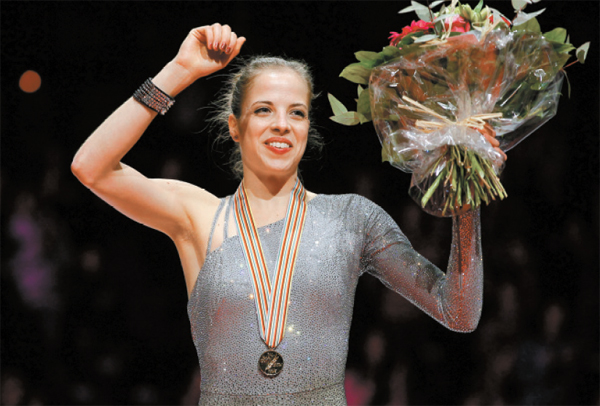 Carolina Kostner of Italy poses with her gold medal after the women’s free skating event at the 2012 World Figure Skating Championships in Nice, France, on Saturday. [AP/YONHAP]


NICE, France - Canadian Patrick Chan crashed so hard during his free program on Saturday that an hour later he was still holding an ice pack to his bruised body.

It was a scene all too familiar to Carolina Kostner, but the Italian finally ended a decade of disappointment as she and Chan were crowned champions at the World Figure Skating Championships on Saturday.

Kostner has long been the standout female skater in Europe, winning four continental titles in the last six years, but is equally known for some spectacular meltdowns.

None was more painful than the one she suffered a hop, skip and jump away from the French Riviera at the 2006 Turin Winter Olympics, when she became the butt of jokes in her country after falling on practically every jump she attempted.

On Saturday, she finally won the title with a career-best score of 128.94 in the free skate to give her a total of 189.94 as she became the first Italian woman to win the global title.

“Being here reminded me so much of Torino, but this time, I was determined to make amends,” Kostner told reporters.

The 25-year-old beat her closest rival, Russian Alena Leonova, by more than five points, while Japan’s Akiko Suzuki trailed in third with 180.68.

“I just wanted to skate my best, straight from my heart,” added Kostner.

She was true to her word.

Sporting a slinky, silver bodysuit, it seemed as if Kostner went into a trance the moment the melodic strains of Mozart’s Concerto No. 23 started wafting around the arena.Kostner’s many supporters, who had witnessed more falls and tumbles than they would care to remember over the last 10 years, were unable to sit still for the next four minutes.

After Kostner nailed her 11th and final jump in a sublime performance that included five triples, the fans danced down the aisles knowing that the gold was finally going to Italy.

Chan’s victory was not greeted as enthusiastically. In fact, the crowd booed, jeered and hissed after he was declared the winner despite crashing to the ice on a double axel.

The crowd thought that the howler should have handed the title to 2010 champion Daisuke Takahashi for his hypnotizing “Blues for Klook” free skate.

The judges did not agree.

They rewarded Chan for being the only skater out of the 24 finalists to land two quads cleanly, and Chan topped the long program standings with 176.70 despite incurring a two point deduction. He won with a total of 266.11.

The boos and whistles followed Chan all the way from the kiss-and-cry area to the medal ceremony, but he chose to turn a deaf ear and kept his smile intact as he went off on a lap of honor.

“I didn’t actually notice the noise. I could just sort of hear it in the background,” Chan said after he became the first man since Stephane Lambiel in 2006 to win back-to-back titles.

“I wasn’t sure if it was cheers or jeers, but either way, it was pretty cool.”

As far as the audience was concerned, it was the two Japanese skaters who were “cool.”

Takahashi, the only skater among the top three not to tumble, settled for silver after trailing by 6.45 points.

Japan celebrated having two men on the podium for the first time as teary-eyed teenager Yuzuru Hanyu grabbed bronze on his world championships debut with his “Romeo and Juliet” interpretation. The 17-year-old had not been considered a medal contender having finished seventh in the short program, but he won a standing ovation on Saturday.