A chance to make a splash in the water market

A chance to make a splash in the water market 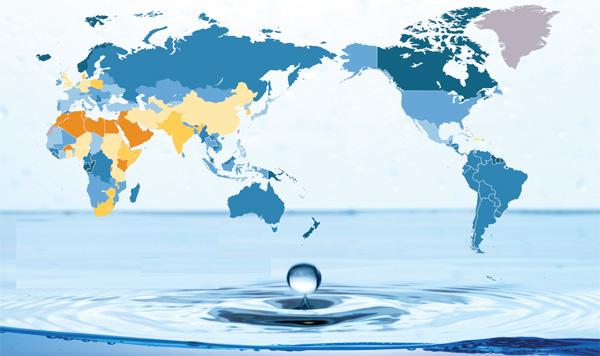 Marking the 20th anniversary of World Water Day on March 22, a worrying report was published by the U.S. Office of the Director of National Intelligence, according to The New York Times.

The report said water could be a crucial aspect of conflicts among countries and it could also become a terrorist target.

Due to population growth, climate change and loss of water, the global supply of desalinated water won’t be able to meet demand by 2040, triggering political uncertainty, economic downturn and competition in the food market, the report estimated.

Concerned about a possible war on water 10 years from now, advanced countries around the world are intensifying competition in the global water market that is forecast to grow into a huge industry in the next 10 years. Korea is also involved, though belatedly, and expects the next few years to be a crucial time to expand its presence in the critical industry.


Korea’s status in the water business

Korean businesses have made some achievements since 1965. However, not much research had been conducted on the market until last year, keeping public awareness about the water industry at bay.

According to initial research by the Korea International Trade Association (KITA) last year, a total of 113 Korean businesses won about 37 trillion won ($32 billion) in orders from 49 countries from 1965 to 2010. There were 500 contracts made.

In 2010 alone, they were awarded $1.6 billion in water-related deals, accounting for a mere 0.3 percent of the global water market at the time.

“Given that the global water market is growing quickly, Korean businesses are falling far behind competitors in other countries,” said Jang Hyun-sook, a research fellow at KITA.

The water industry can be divided into three big sectors - facility manufacturing, water plant construction and service operation and management. Each sector is seeing 5 percent annual growth. In particular, the facility manufacturing sector including filter systems is expanding by a whopping 20 percent every year, the KITA report said.

Korean companies sign 10 to 20 new contracts each year. About 85 percent of the orders are placed by Middle Eastern countries, the report said. The Korean firms excel in building water supply and drainage systems as well as desalination plants. However, service operations barely took up 0.2 percent of the total water project orders for Korean companies, indicating that they are relatively less competitive in the sector.

The global water market is forecast to grow from the current $482.8 billion to $865 billion by 2025, said Global Water Intelligence (GWI), a British water market researcher. About 77 percent of the total water market is claimed by the waterworks sector. However, the desalination and regenerated water for boiler feeding parts are projected to expand remarkably by 7.5 percent and 18.4 percent each year for the next 10 years.

Until 2030, a huge amount of investments is expected to be made by advanced countries. The United States, the United Kingdom and Italy will put in 500 trillion won, 128 trillion won and 60 trillion won, respectively. Such countries are planning to replace old water supply and drainage systems.

The so-called BRIC countries (Brazil, Russia, India and China) are also forecast to pour over 8,300 trillion won into waterworks systems as part of efforts to establish social infrastructure.

By region, the Middle East, Africa and Asia are going to be main spots for the water business. The GWI projected that these regions will see 10 percent annual growth in their water markets until 2025. More specifically, the Chinese and Saudi Arabian markets will be enlarged by 10.7 percent and 15.7 percent each, outstripping other countries both in size and speed.

The researcher added that since there are increasing numbers of water businesses in Singapore and Malaysia, the two countries also draw attention in becoming key markets for the water business. 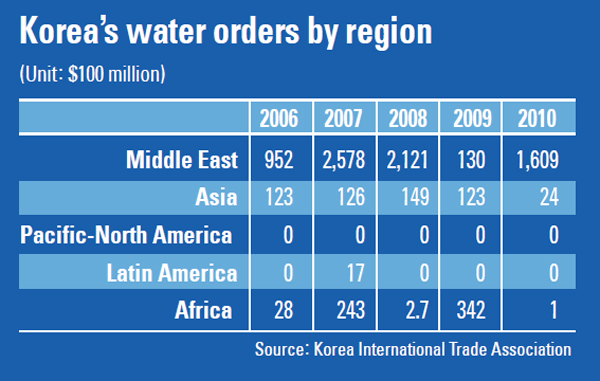 According to a report by the OECD, about 40 percent of the world population currently suffers severe shortages in drinkable water and water for agricultural and industrial use. By 2025, an estimated three billion people in 52 countries will suffer water shortage problems, the report projected.

Korean heavy industrial groups with cutting-edge technology are showing quite a performance in recent years. Some conglomerates capable of constructing desalination plants are advancing further into the water market through their subsidiaries entering the water treatment facility and service operation sectors.

Samsung Engineering, a leading engineering, procurement and construction company whose main turf is the Middle East, first entered the drainage system sector but has now expanded its territory into desalination plant construction. Last year, Cheil Industries, its subsidary, set up a pilot production unit for membranes for water filters at its research and development (R&D) center in Uiwang, Gyeonggi.

Woongjin Coway, the largest drinkable water business in Korea, is excelling in building systems to purify wastewater. Woongjin Chemicals has achieved some performance in the water filter market. The chemical unit of Woongjin is recognized for reverse osmosis membranes first developed in 1994. According to the company, Korea is the third country to develop it after the U.S. and Japan.

These companies said they are planning to expand their water treatment businesses by investing an estimated 200 billion won by 2020.

“Our top priority is to develop high value-added water treatment facilities like membranes with state-of-the-art technologies,” an official at Kolon said.

Living up to the country’s reputation as an IT powerhouse, Korean companies are seeking ways to apply IT technologies to water management.

Samsung SDS has developed a solution for intelligent water system management. “It enables users to monitor conditions of waterworks and drainage systems, including adjusting water levels,” the company said. The solution was applied to management of the Cheonggye Stream in 2008, which served as a testing ground.

LG CNS is currently looking for opportunities to make inroads into other countries with its automated water quality monitoring systems. SK C&C and SK Telecom are also preparing to establish a system to monitor water quality and offshore weather conditions in real time.

The biggest player in the local water business is Doosan. The company is now constructing the world’s largest desalination plant with a daily capacity of 1 million tons for up to three million people in Saudi Arabia.

Doosan is highly recognized for its ability to build desalination plants across the globe. For the past 30 years, Doosan Heavy Industries won 22 desalination plants, the largest record for a single company. If summed up, all of the plants built by Doosan can supply 4.5 million tons of usable water for 15 million people a day.

It is the only company that possesses three key technologies for the construction of such plants, the company said. They are: multi-stage flashing, reverse osmosis and multi-effect distillation approaches.

The company took over the water treatment unit of the U.S.-based AES and set up Doosan Hydro Technology in late 2005. The new Doosan water unit then forged a partnership with Carollo, the No. 1 water treatment engineering company in the U.S. in 2008.

Singapore is a representative example in showing that the water business is actually thriving. The country with 4.6 million people is expected to be suffering from water shortages due to limited land and few sources of fresh water, according to the OECD. Since the 1970s, Singapore has been importing water from Malaysia.

However, the Singaporean government has made strong efforts to stave off a possible water crisis in the future. The Changi water treatment plant located near the Changi International Airport is the epitome of advanced water treatment technology, according to a research fellow at the Samsung Economic Research Institute.

The plant turns about 800,000 cubic meters of wastewater into drinkable water every day. It meets 40 percent of the country’s total demand for fresh water.

The Changi plant is known for its high-tech membranes that were established in cooperation with 29 global water treatment companies including GE Water and Siemens. However, no Korean company is involved.

Singapore has been ahead of other countries in projecting the water crisis and taking action to address the problem, KITA’s Jang said.

“If Korean companies target Singapore, there will be more opportunities to catch up with top-rate companies like GE Water in the same market,” Jang said.

Other than Singapore, Thailand is also rising as a promising new market, the KITA report said. After the massive flood that swept Bangkok last year, numerous world-class water companies like France-based Veolia, U.K.-based Thames Water and Japan-based Mitsui & Co. are already looking for chances in Bangkok. They are bidding for the Thai government’s flood prevention project, including construction of dams and barrages. The bidding competition is expected to be fiercer as more companies from the Netherlands and China have expressed interest in the project.

Earlier this week, Chairman of the Federation of Korean Industries Huh Chang-soo met with Thai Prime Minister Yingluck Shinawatra in Seoul. There will be more chances for Korean water businesses this year to enter the Thai market, according to the agreement between Huh and Shinawatra.